A Year in Review

I landed in Barbados November 26, 2020, exhausted after being surrounded by more people on the plane than I had been in contact with the eight months previously. It is one thing to move house, it is another to move country, and quite another to do so during a pandemic.

I had left Toronto in the morning with a winter coat, pants, and my hiking shoes on, and of course a mask. That evening when I sat on the porch of my quarantine hotel, I wore a sleeveless top and shorts. I listened to the symphony of the tropics as the sun went down – the parrots, and the tree frogs – and my heart was full of gratitude. In a play to save my mental wellbeing, I had escaped the winter lockdowns in Canada and Barbados has harbored me during the pandemic ever since. This is my year in review. 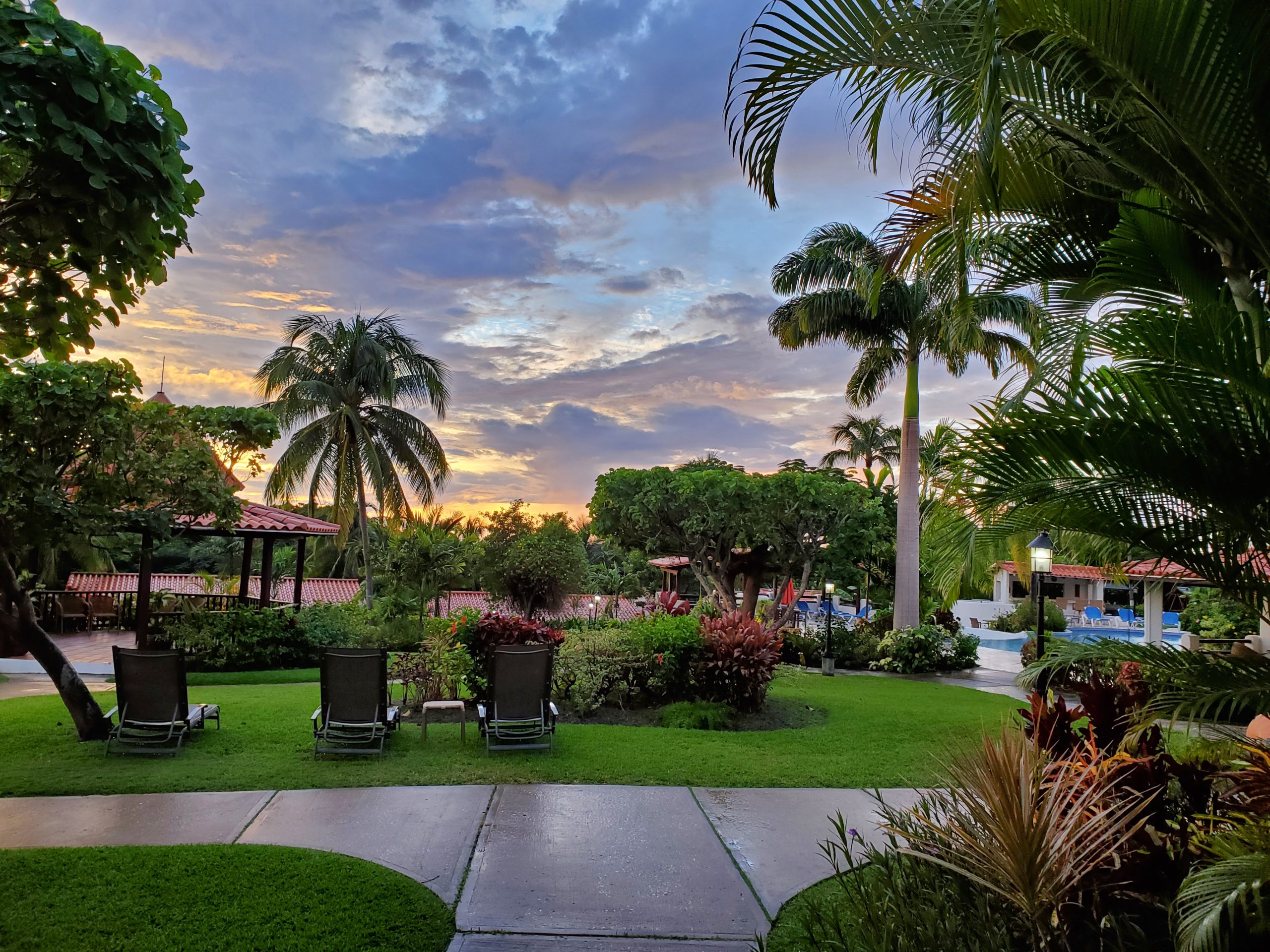 Sunset at Sugar Cane Hotel where I quarantined 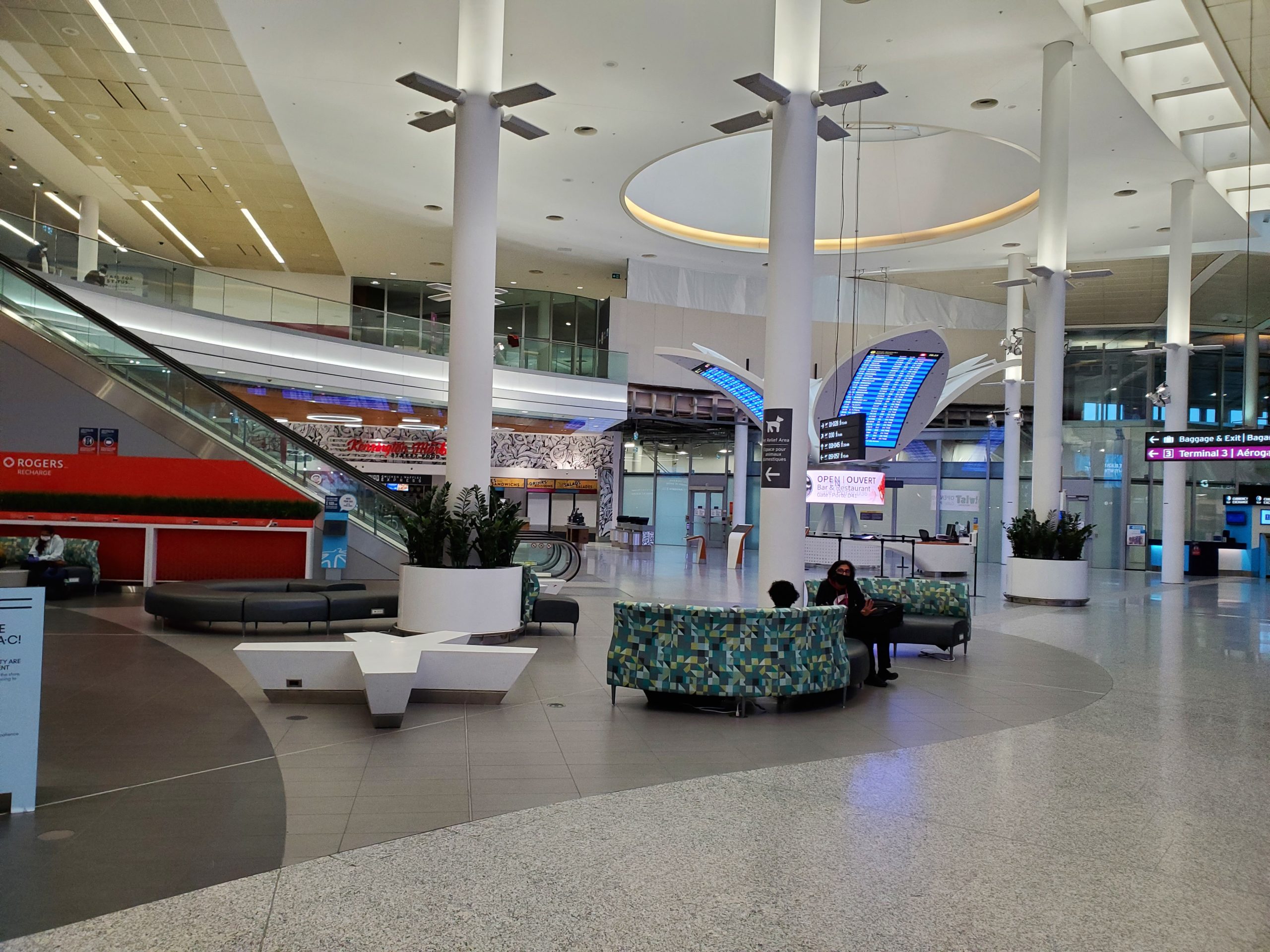 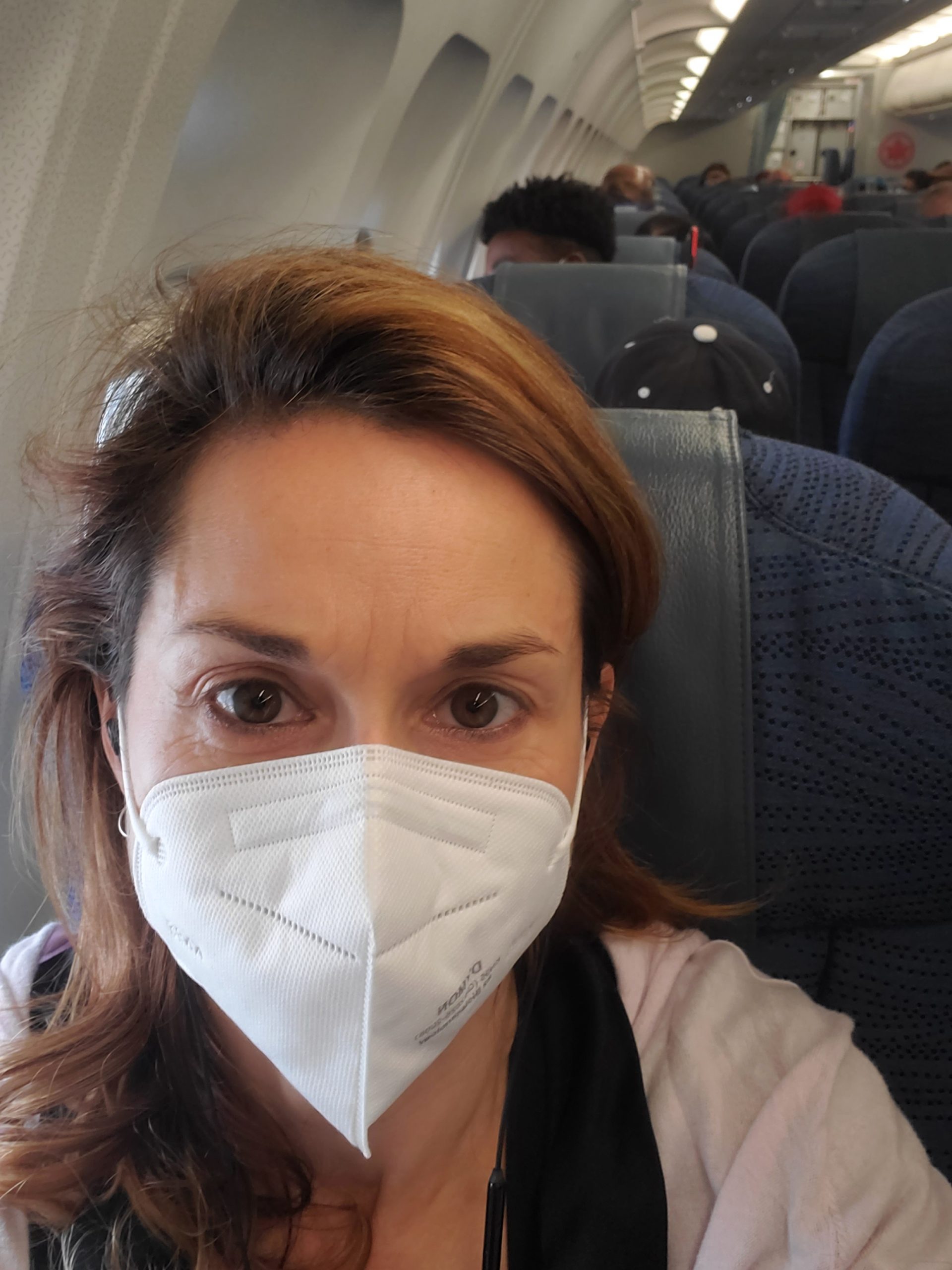 A packed plane from Toronto to Barbados

Most Touching Moment:  My 49th Birthday

On November 23rd I turned 49. The South Africans have been away this week and left me their place for a staycation. I had my other close friends over for the evening and Lorena left this video of birthday messages. I (usually) experience a sadness around my birthday that it is (usually) cold, that I don’t have a partner, and that I hope that people will want to celebrate with me. I didn’t feel any of these this year surrounded in the loving kindness of my friends. I am grateful!

The only person that I knew on the island when I came here was a surfer and I was fascinated by the culture. I now understand the obsession with surfing – intermittent reinforcement – the reward is coming but you do not know when you are going to get it and you do not know how good it is going to be. I have developed a deep love of the ocean, a sort of meditation as my board rises and falls on the waves waiting for the next set to roll in. Learning to surf so late in my life is a lesson in being humble and letting go of perfection. These are just the beginning of the lessons that the universe has taught me through this sport. 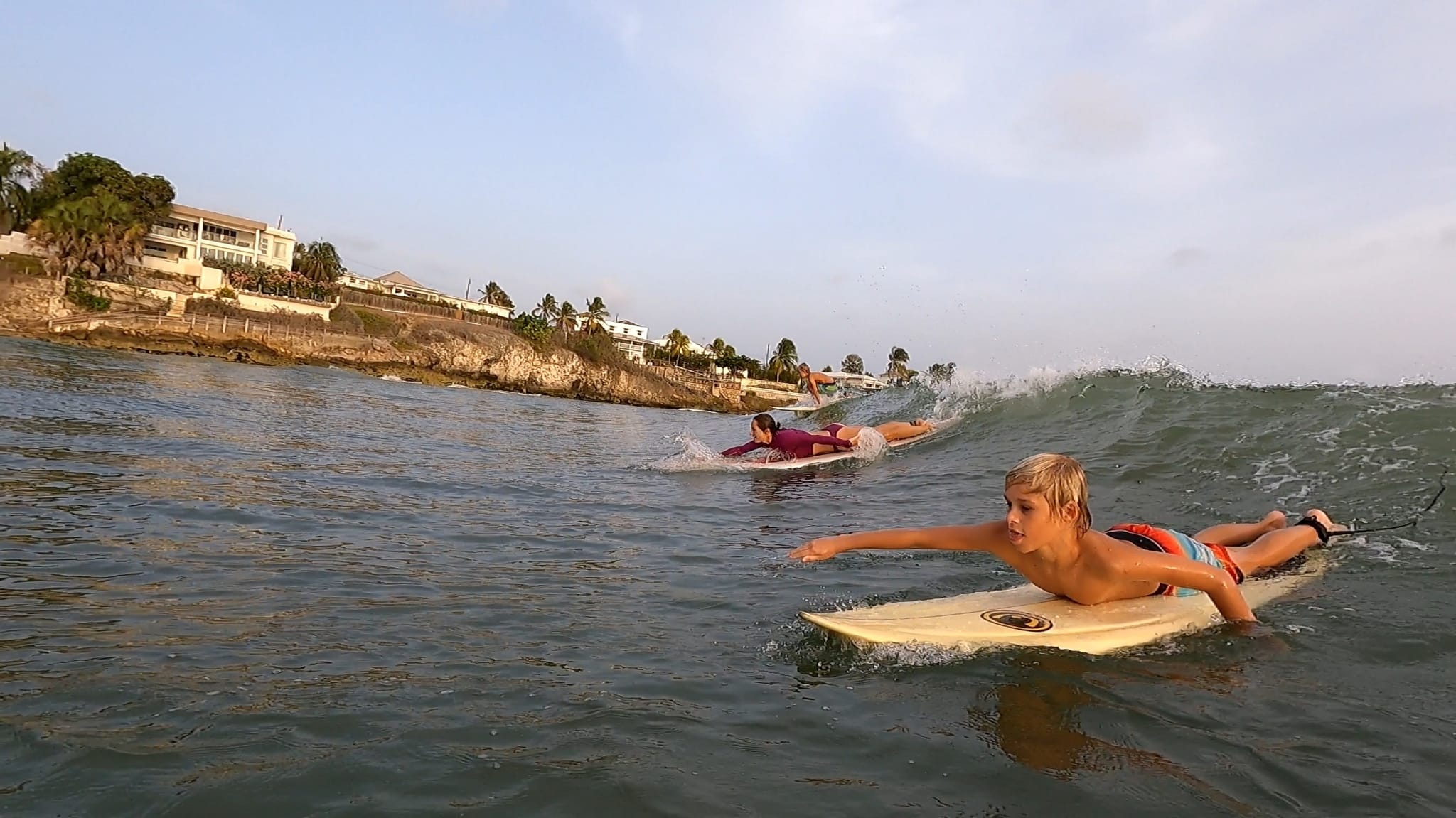 Luca, Kian and I paddle for the same wave to see who can pick it up 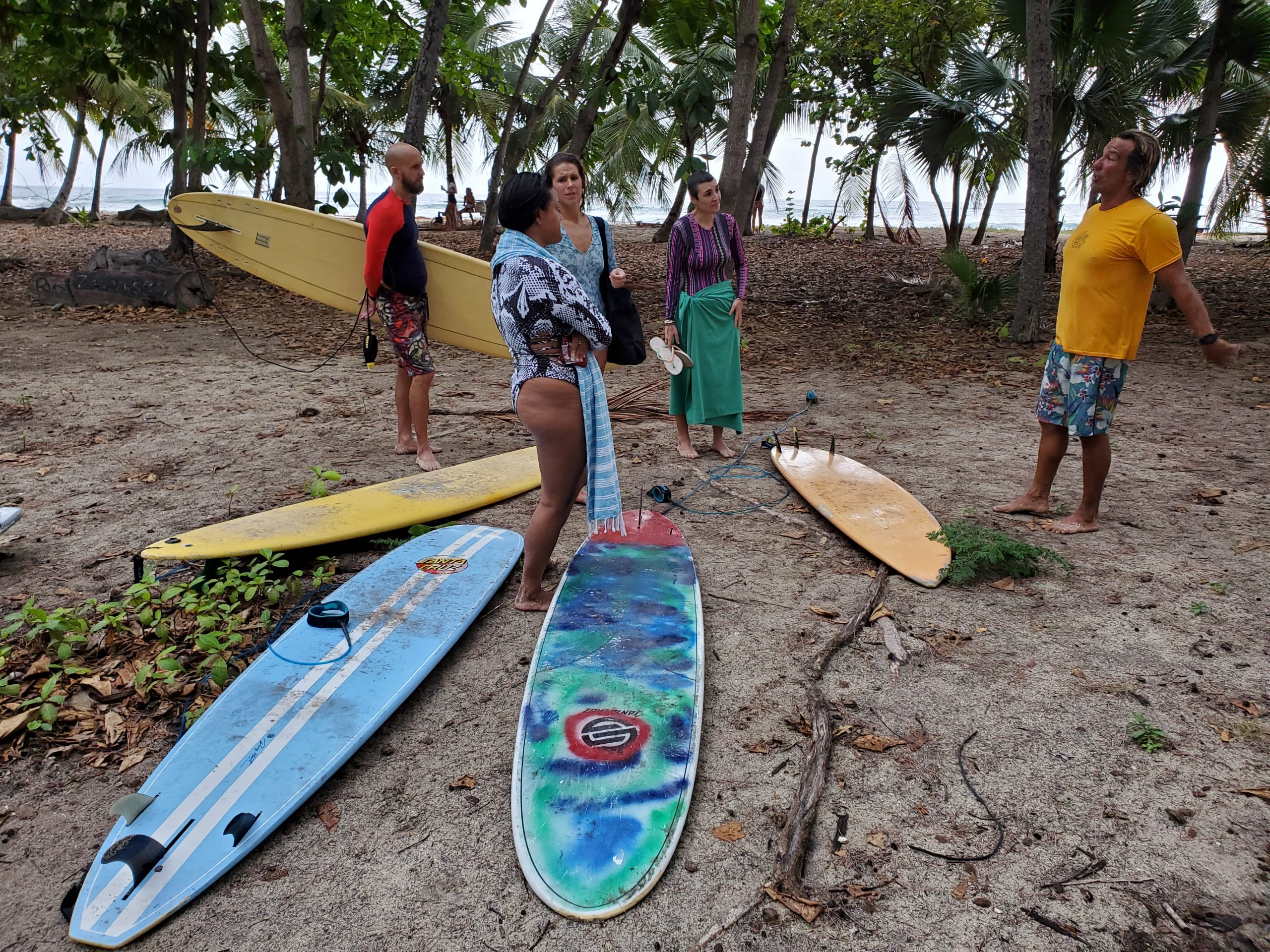 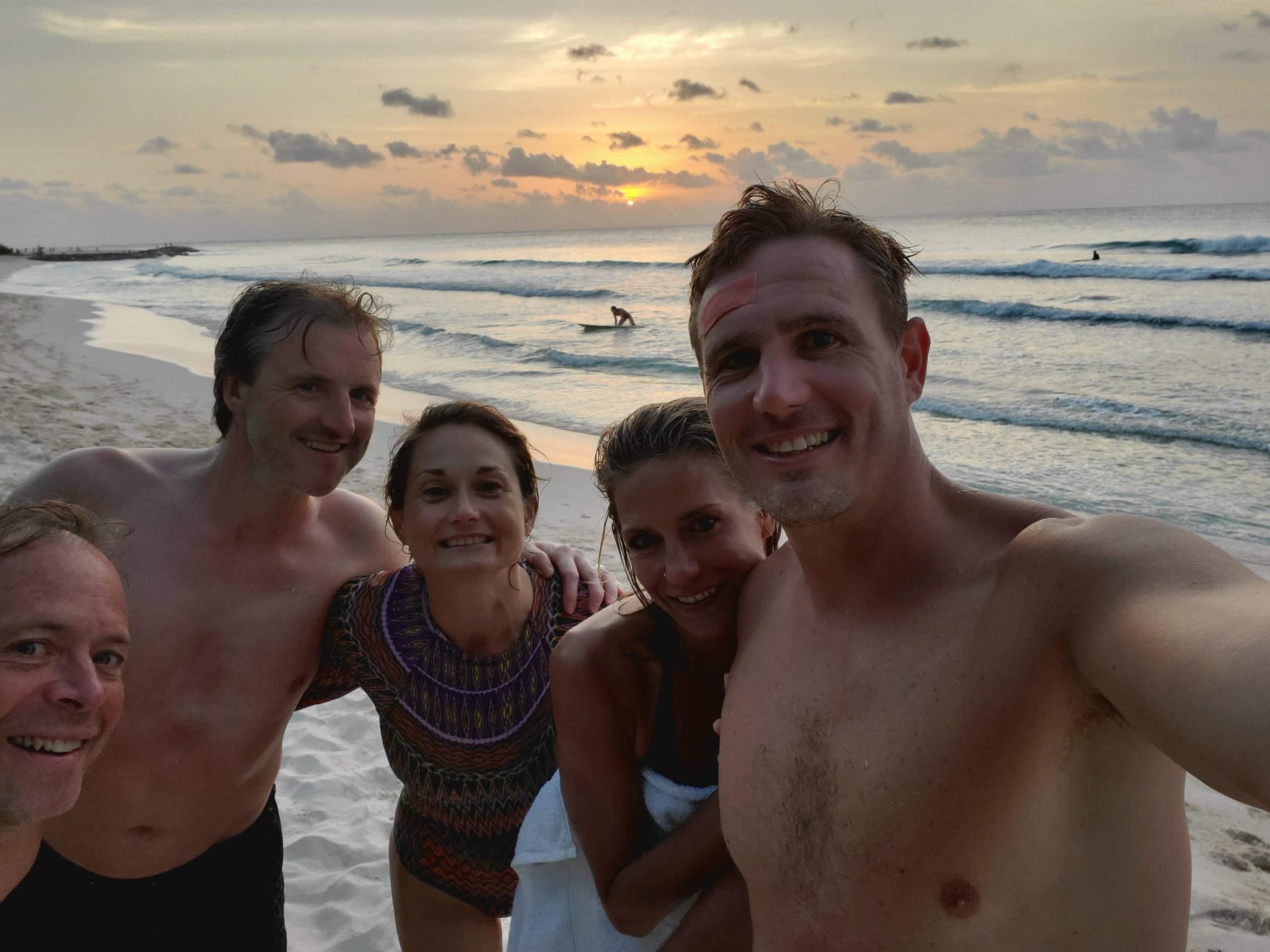 Learning to surf with Dani, Kev, Keelan and James - sunset at Drill Hall off the water 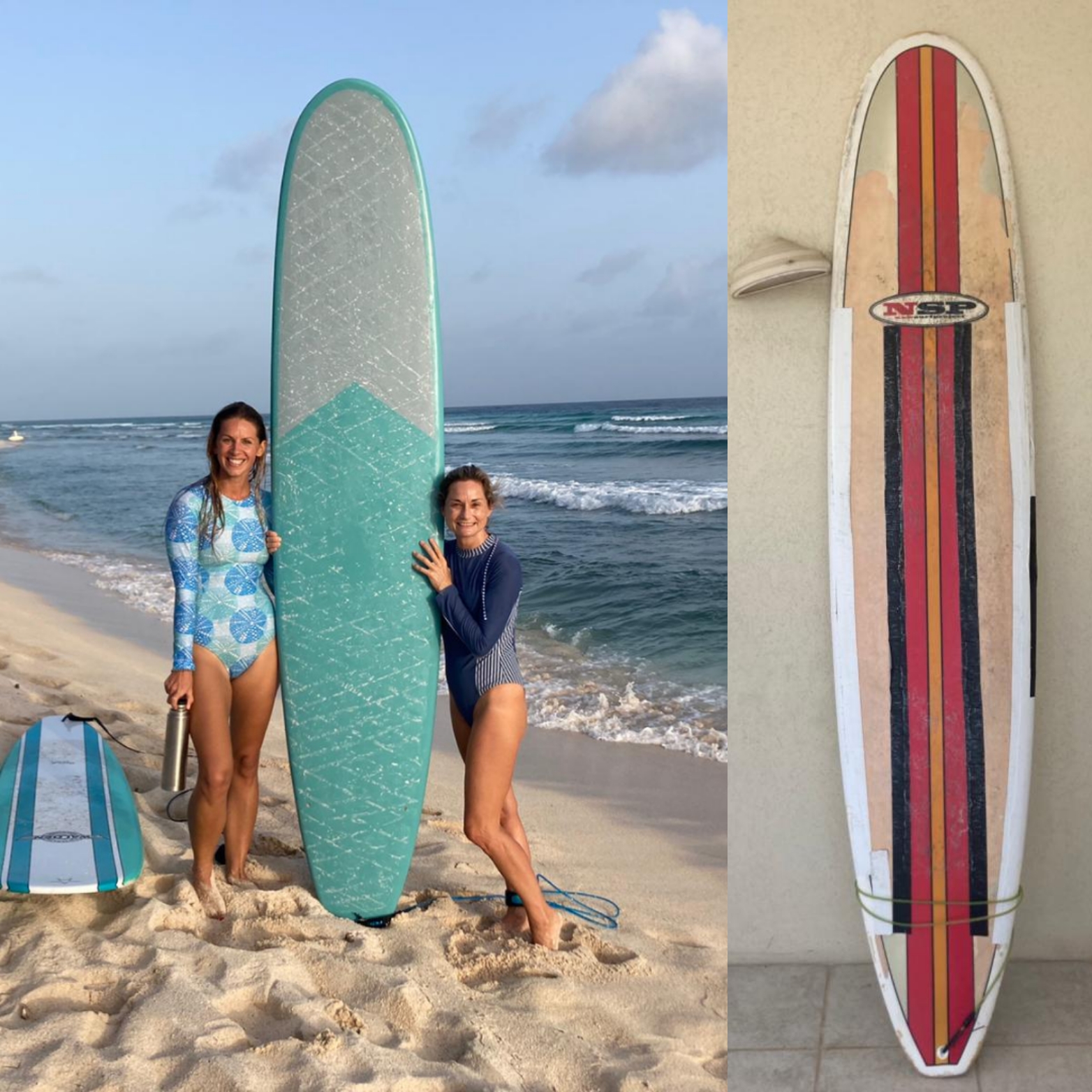 Kate designed a new image for the old NSP Surfboard

La Soufriere volcano, on the island of St. Vincent, began erupting for the first time in 42 years. On April 9th the volcano erupted so violently that it sent ash into the jet stream, and covered Barbados. The ash blocked out the sun, like a winter blizzard; except that it was hot outside, and we were trapped inside with no air conditioning and all the windows closed for the next week. It is the one time that I have truly lost my shit while being here. I had to reach out and draw upon my supports at home to get through this difficult period. Who knew that it would take me over 40 years to learn that vulnerability pays off?! Ash cover after La Soufriere volcano on St. Vincent erupts, sending ash into the jet stream and landing on Barbados

The Most Exciting: Hurricane Elsa

Barbados had not been directly hit by a hurricane for 65 years. On July 2nd we woke to 114kph winds as Hurricane Elsa battered the island. I lived in an old Bajan home built of cement that looked like it could withstand anything, so it was rather exciting. But many on the island lost their homes, and many more lost their roofs. It was a reminder that not all people experience an event the same, especially a tragedy. Some of us get out much more untouched.

The Most Wonderous: Whales Breaching

Apparently, it is unusual to see whales on the South coast, yet there were several sightings last spring. I practice yoga on an open-air balcony of Castaways restaurant overlooking the bay. We were allowed to return to in-person yoga classes March 20th and during this opening class someone called out “I see a whale!”  We ran to the railing and sure enough, you could see a couple of humps rising out of the water. Then, as we all looked onwards in astonishment, two whales jumped out of the water in tandem. I have paid to whale watch on both coasts of North America and have never seen a show like this. Barbados never disappoints.

Barbados is not a land of equal opportunity. It is a paternalistic society, and many men still feel that women are here to serve them. As a female, I feel it the most when I am negotiating with a male or even simply walking around. Men approach me or catcall from their cars or across the street. Some people consider this to be part of the culture and I consider it to be bad behaviour. There is a greater inequality that is even more visible and that is between the rich and the poor, which on this island often means between the white and black. In Canada we talk about the effects of colonialism and there are definite markers, especially with indignities against the Indigenous population – here the reminders are everywhere. I am still trying to work out whether my role here is one of impact or acceptance.

The Best Time: Copacabana with Jamie and Co.

I love to dance. It is the last longing that has not been restored during the pandemic. Yet, there have been glimpses when there has been a brief loosening of the restrictions. One such night was at the Copacabana club on Carlisle Bay. It was a going away party for someone who announced at the party that he had changed his flight and was not going back to the States. People find it very hard to leave Barbados! It was a blast dancing barefoot in the sand, and we didn’t get shut down by the COVID police, which interestingly has happened to me twice on the island while dancing. During the heaviest lockdown in February/March, we were only permitted to use the beaches from 6-9am. This meant that all the surfers were in there at the same time, the beginners and the Gods and Goddesses. It created a great deal of tension, and the experienced surfers were not usually kind to us beginners. However, Easter Monday, I found myself at the Drill Hall surf break having a tough time catching anything. Darren, who I had spoken to before, provided me with a couple of tips and then we started talking. We figured out that we were both from Canada, that in fact he had worked in London where I am from, and his wife Erin was from Ilderton. My Dad is from Ilderton, and it is not a very big place! These lines of familiarity continued until Darren said that I looked familiar, did I work at Ernst and Young? Yes, my coop terms were there and discussing the name of a mutual friend made me realize I had worked with Erin. Then I knew exactly who Erin and Darren were, in fact, I had been at their wedding with this mutual friend! By the time that I got home, Erin had sent me a picture of my signature from the wedding guest book. I now surf with Darren often and go with Erin every Saturday morning to the Brighton Market. They had me over for Thanksgiving dinner and have become my Canadian home away from home. Who would have thought we would bump into each in Barbados 25 years later? This gives you an idea of how I could be “stranded” on this island for an entire year, longer than any point in my adult life where I haven’t left a 166 square mile radius. With so much to see, do, and discover, Barbados has become a playground and escape from the pandemic. The challenge of moving to a foreign country solo has been a teaching ground for me to learn life lessons that I have been tripping over for many years.

We often wait until January 1st to do a year in review. If you had to do one now, what would it say?

What a wonderful year. More pluses than anything else, make for a positive year of which there are many more to come. So glad to be sharing it with you.

There definitely have been more pluses this year! It is all perspective – the ash cloud was tough, but like Conrad said, We survived a volcano, how often can you say that?! So glad that you guys are here.

I have been totally enjoying your posts, Sheri. So thoughtful and well written, they are always a delight to read. Thank you! Happy Birthday!! I’m so happy you have discovered such a wonderful place.

You have been with me since the beginning of the journey in Ottawa. I have enjoyed your emails to me with your thoughts and know that others will be interested in them as well. Thank you!

Happy Birthday Sheri !! 49 years young and vibrant and “free”.. lol.. free of many things in fact. Love seeing your smiling face in the pictures! Seriously tho, who knows what “volcano’s” would have erupted here in Canada, figuratively of course, so at least you are warm and toasty and at one with the ocean!! hugs always

Thank you Terry for the birthday wishes! It’s true, a real volcano erupted here but people are enduring similar challenges everywhere. Who knows what will happen in 2022 but I hope that it will be hard to beat the craziness of 2021. Barbados has been and continues to be a good place to wait it out and learn A LOT in the meantime. I imagine that Canada is the same.