For Those Able to Move: Expats called away from home

During the pandemic, some people came to Barbados for six days, which became six weeks, and turned into six months.  Some of us never left.  Apparently, this has been happening in Bali for ages.  It didn’t take a pandemic to call people to the energy of this island.

I would be so easy to stay here.  We were at the Bali Spirit Festival on the weekend in Ubud.  There is a huge expat community between there and Canggu.  A very welcoming community.  Two of the yoga instructors at the festival are Canadian.  In talking with them, I discovered that they had found their tribe outside of Canada during the pandemic.  It doesn’t mean that we will never go back.  It does mean that, for now, we feel more at ease with the people that said, there is something better than what is happening at home, and maybe this has been the case for quite some time.

The local expats spoke about Bali opening their borders after essentially being closed for two years.  They described the shock of so many people on the island, an island that is already heavily populated. People are excited to have the tourists back.  It has been a very difficult two years for them.  They are kind and smiling, but you can feel the desperation as they almost beg you to come into their shop or take their taxi. 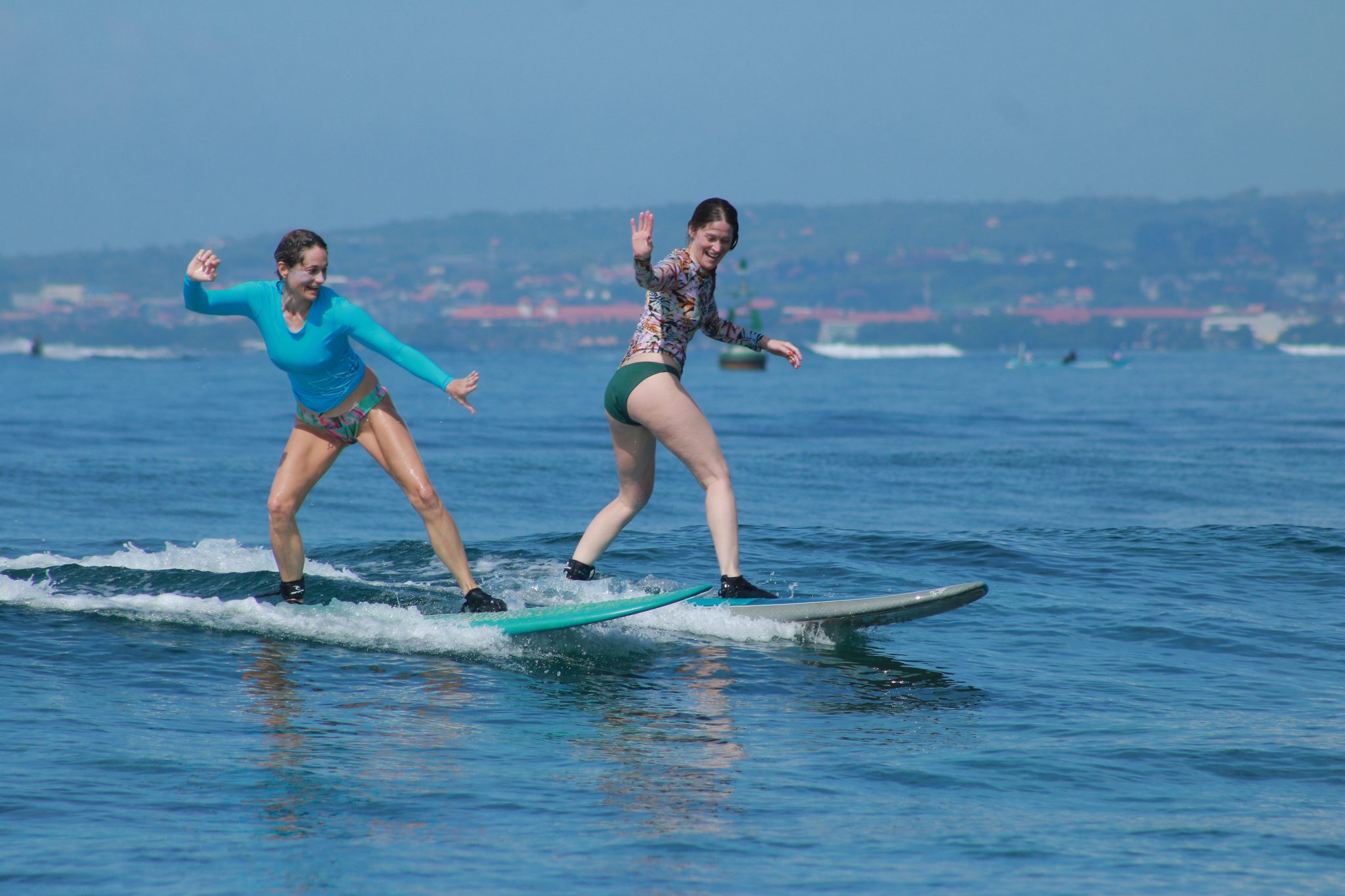 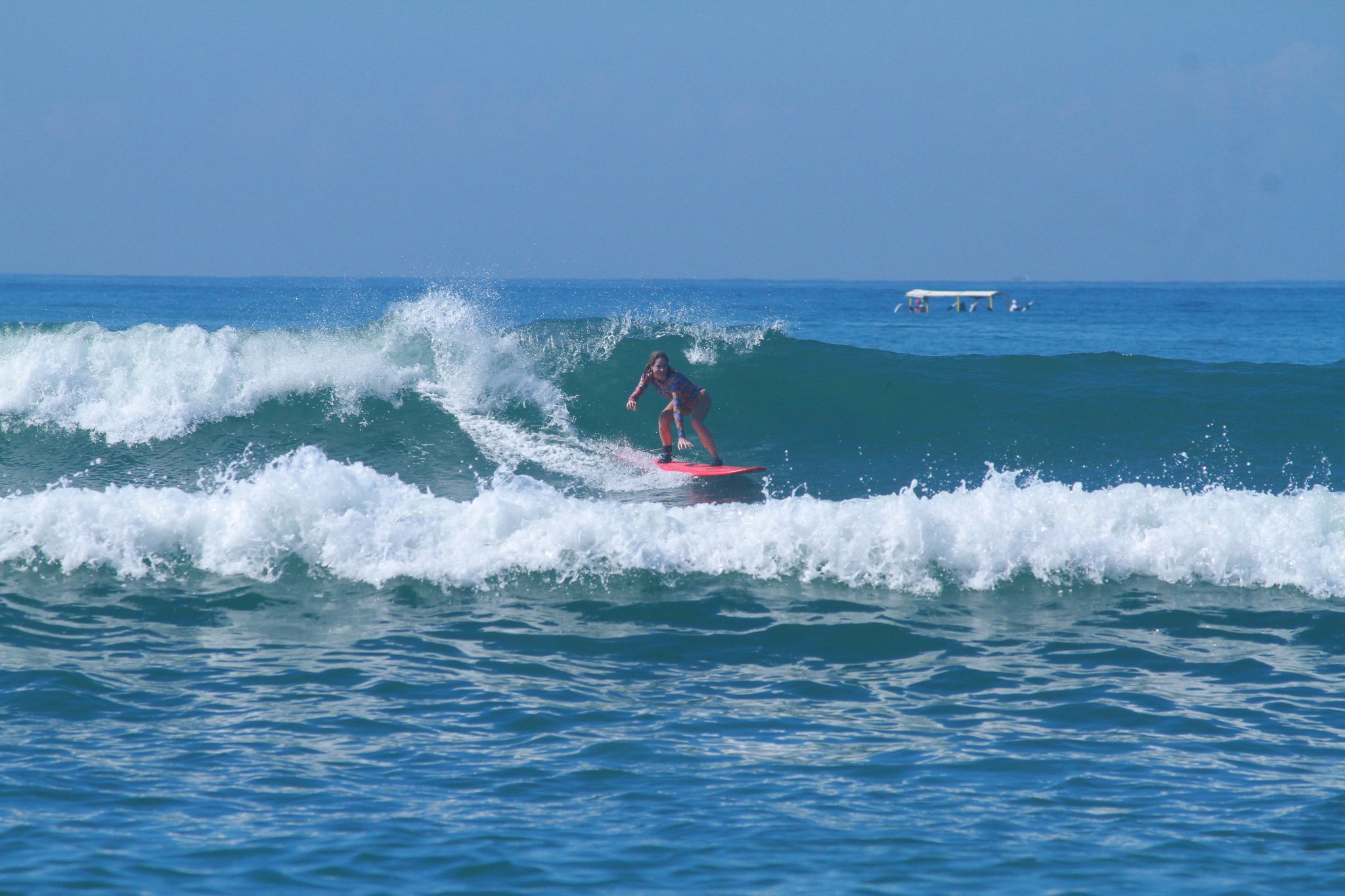 Trying to lean into the wave 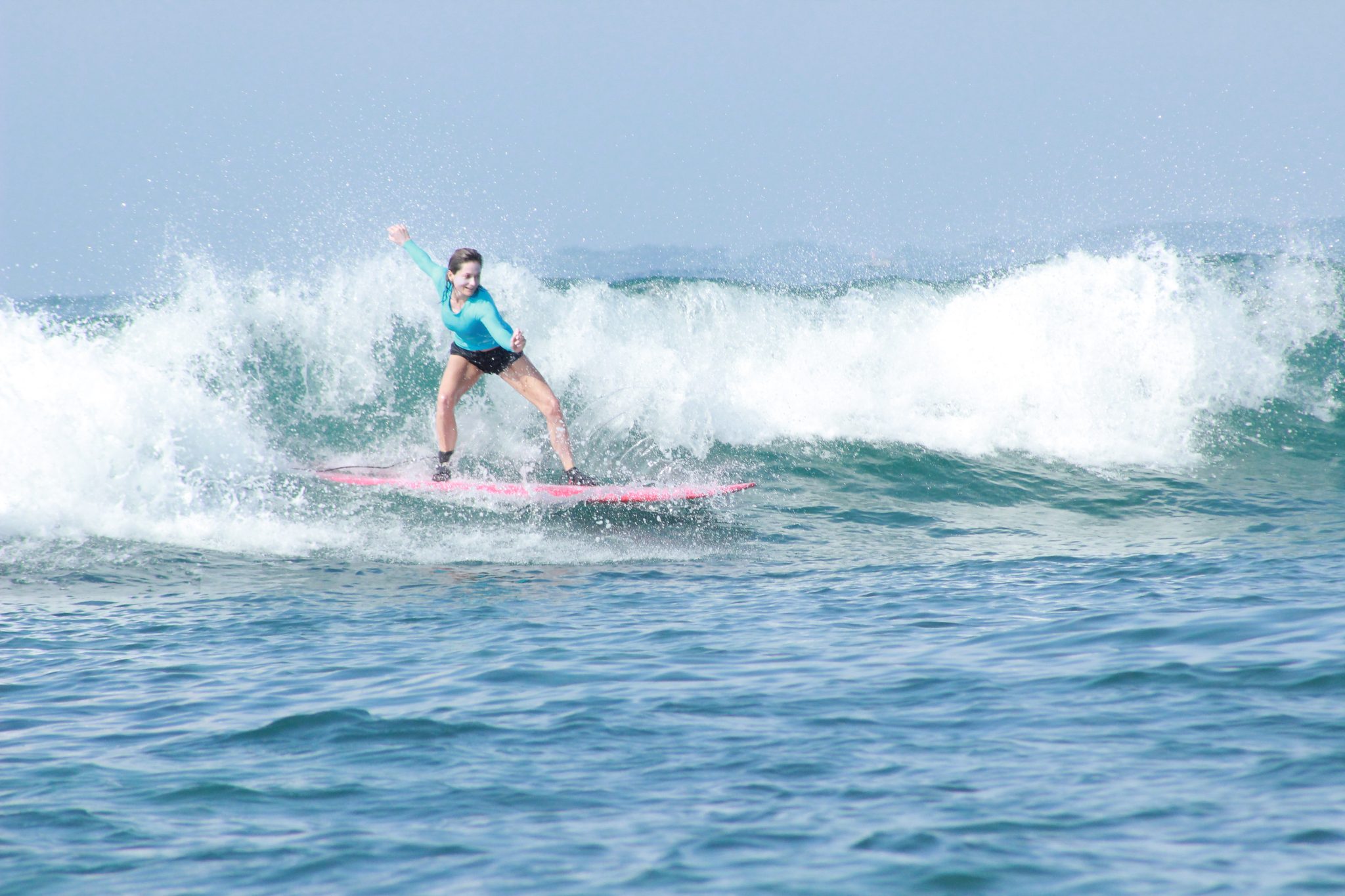 All smiles last day in Sanur

I cannot imagine this place at peak tourism.  I have just come west on my own, about two hours drive north up the coast from the craziness.  I saw the ocean and felt my body relax.  One of the yoga instructors said that every second breath we take is fueled by the ocean.  One from the trees in the forests, the next from the kelp in the ocean.  Water should be something that we revere.    It is so sad that the beaches here are littered with plastics and that they don’t have drinking water from their taps.    This goes for all beaches and all faucets, regardless of a person’s property or status.  I miss the coral reef and pristine waters of Barbados.  I wonder how long it will take before they are covered in garbage.

There is still such beauty here.  Ubud is surrounded by rice fields, which I have been walking through the past couple of days.  It is hard labour; I watched as a man pushed machinery like a rototiller through the muck in the rice paddies.  The effort it must take to grow and pick a sack of rice.  What must it be like to grow up in that environment? 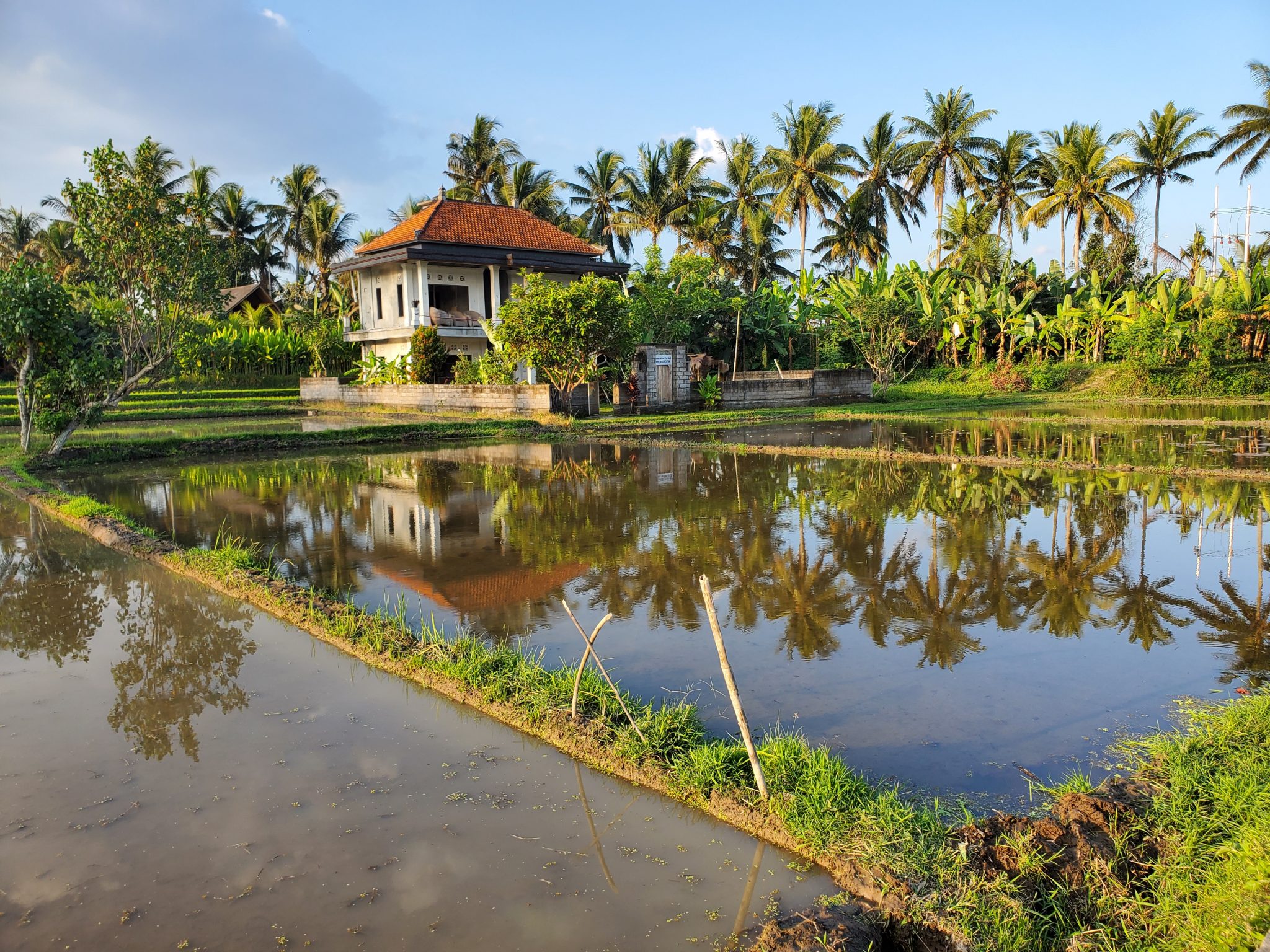 Reflection of palm trees in the rice paddies 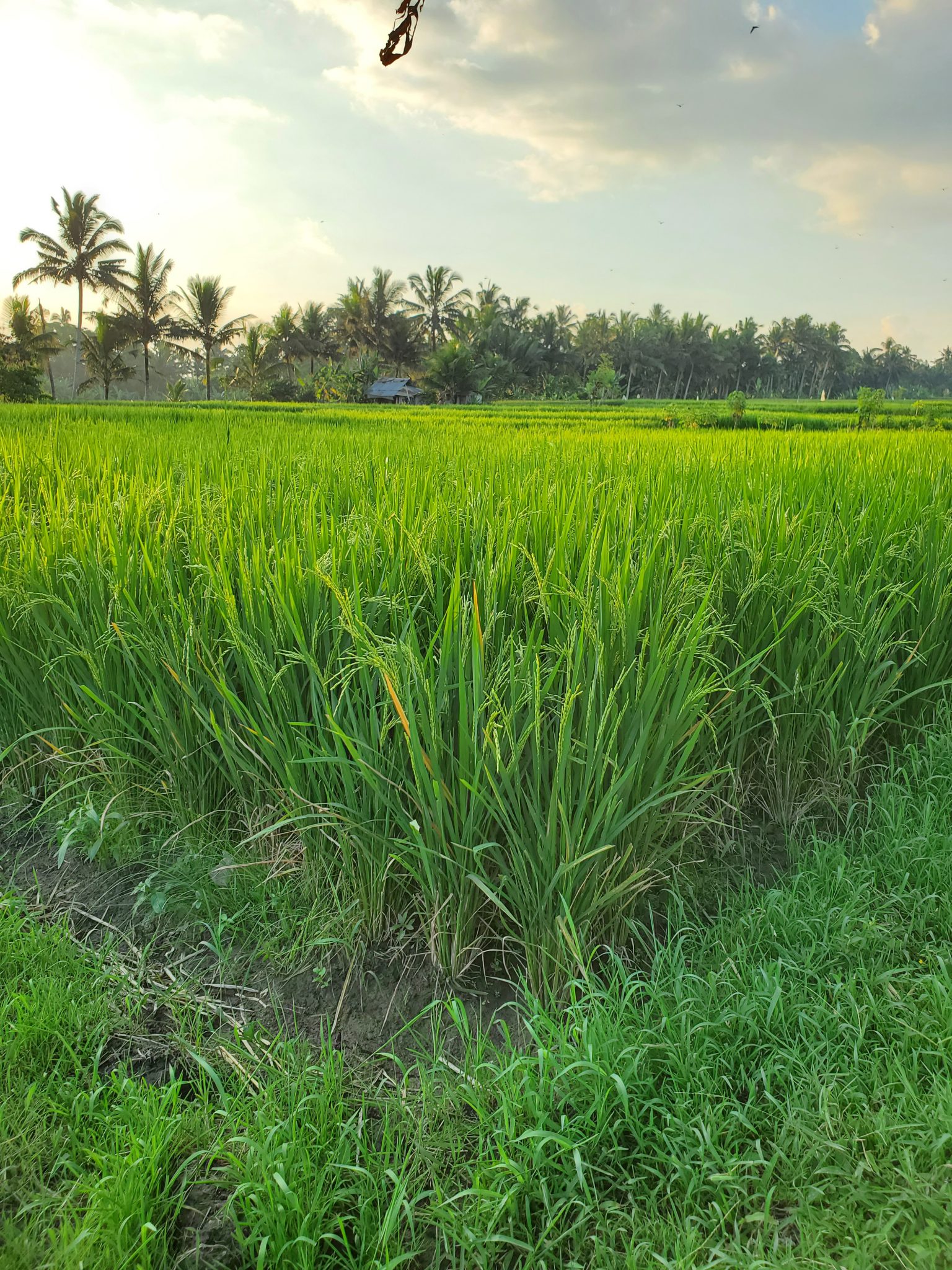 Rice fields outside of Ubud 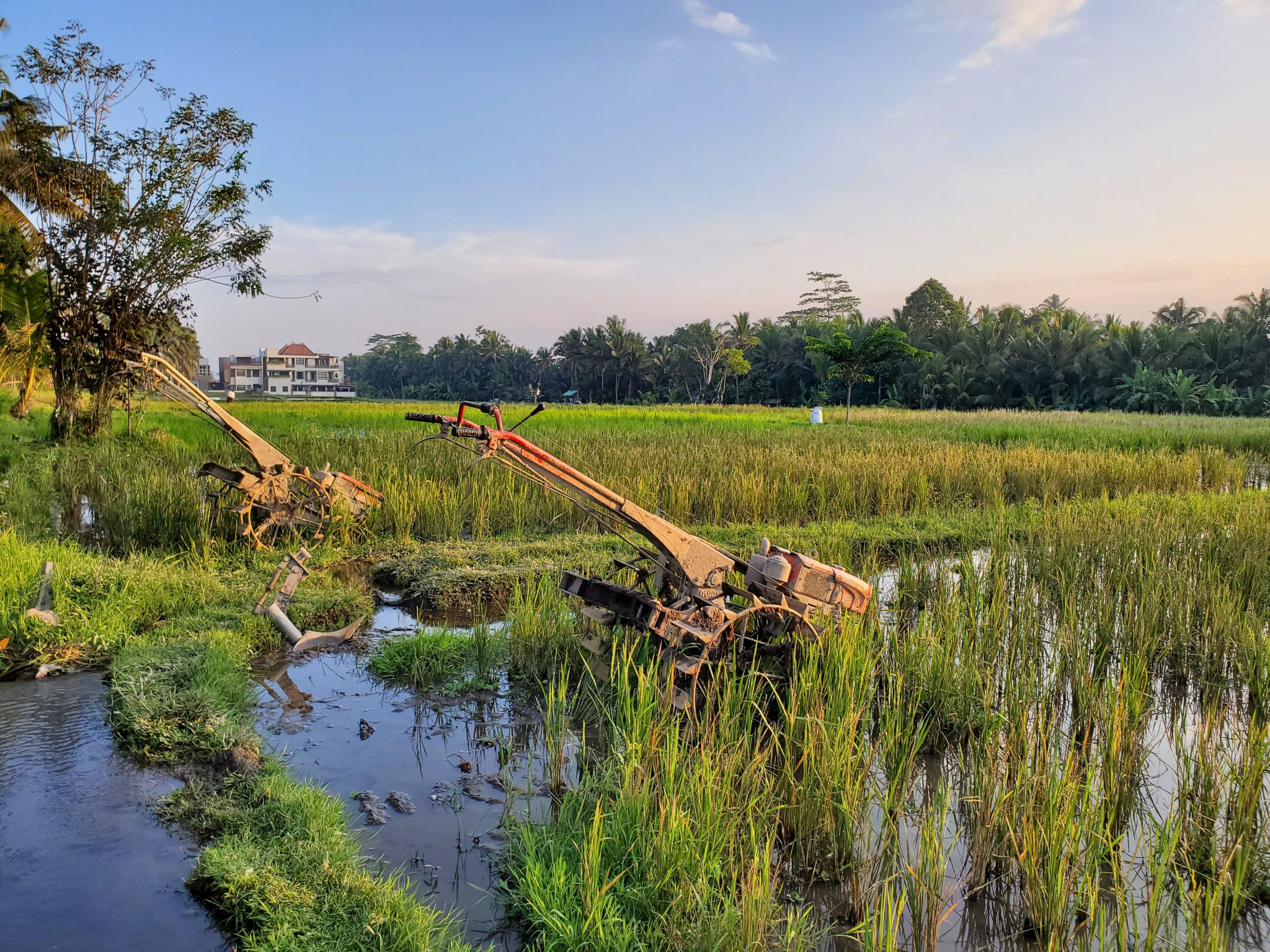 Equipment used to till the fields 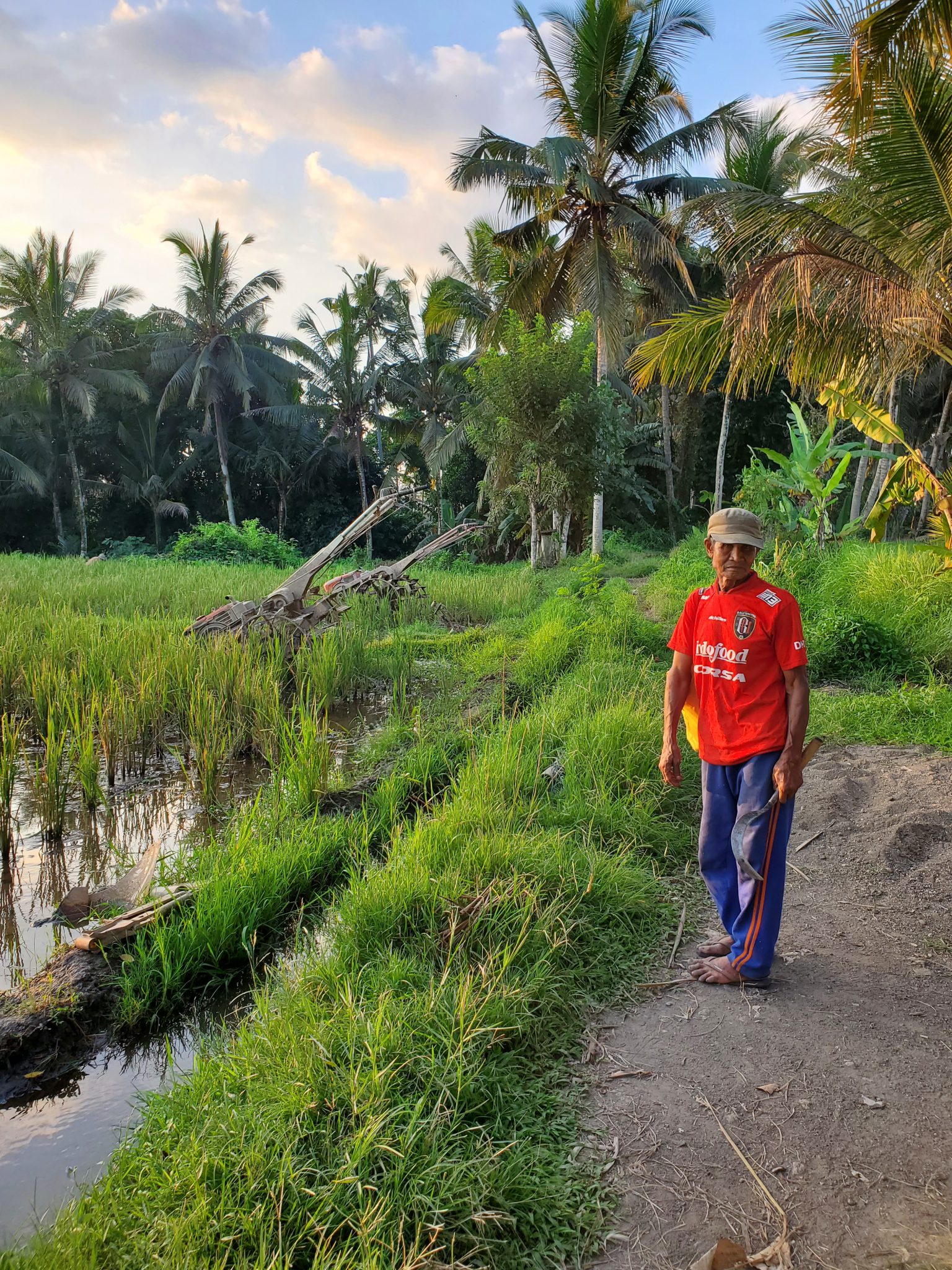 Have you ever had the experience to stop and realize your privilege to be born where you were into the life that you had?

There is a duality here as there is in Barbados.  There are the haves and the have nots.  There are those that were able to ride out the pandemic based on the profits that were made in the past and those that struggled the last couple of years to make ends meet.  Bali represents a cheap place to live for those most fortunate.  It is the only life that most locals have ever known.  The festival in Ubud had Western pricing, and guess who was in attendance?  Not many locals.  So, the division continues.

I have the privilege of experiencing Bali for another two weeks.  Then I get to leave, by my own choice.  I may also return by my own choice.  What a gift that is!  I wonder if most expats and travelers realize how lucky we are to be able to make these decisions.  My experience at the Spirit Festival reminded me that I was one of those able to move when I was called away from home.  In the process, a gentler, happier version of myself was created.  I celebrate that every day. 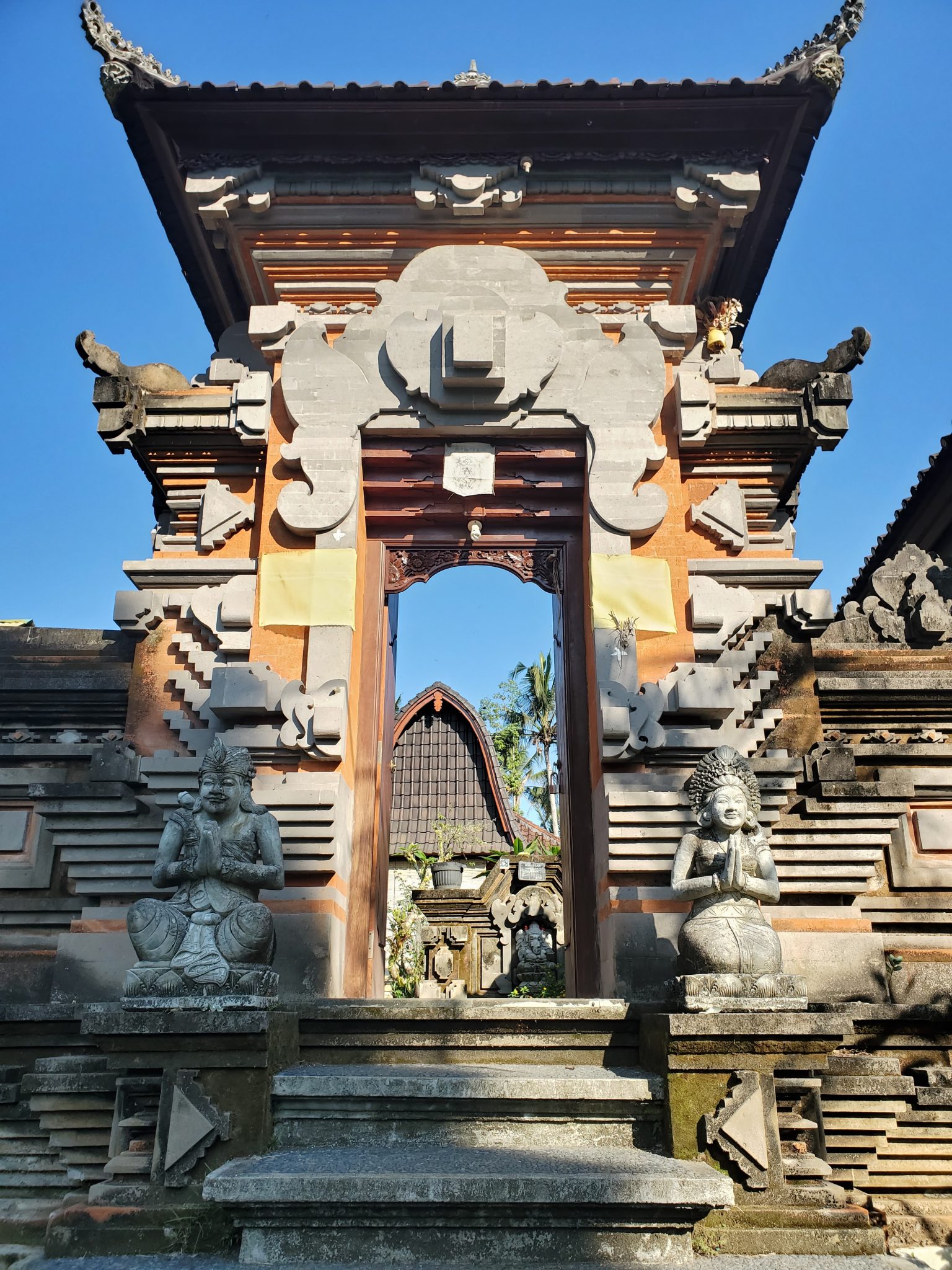 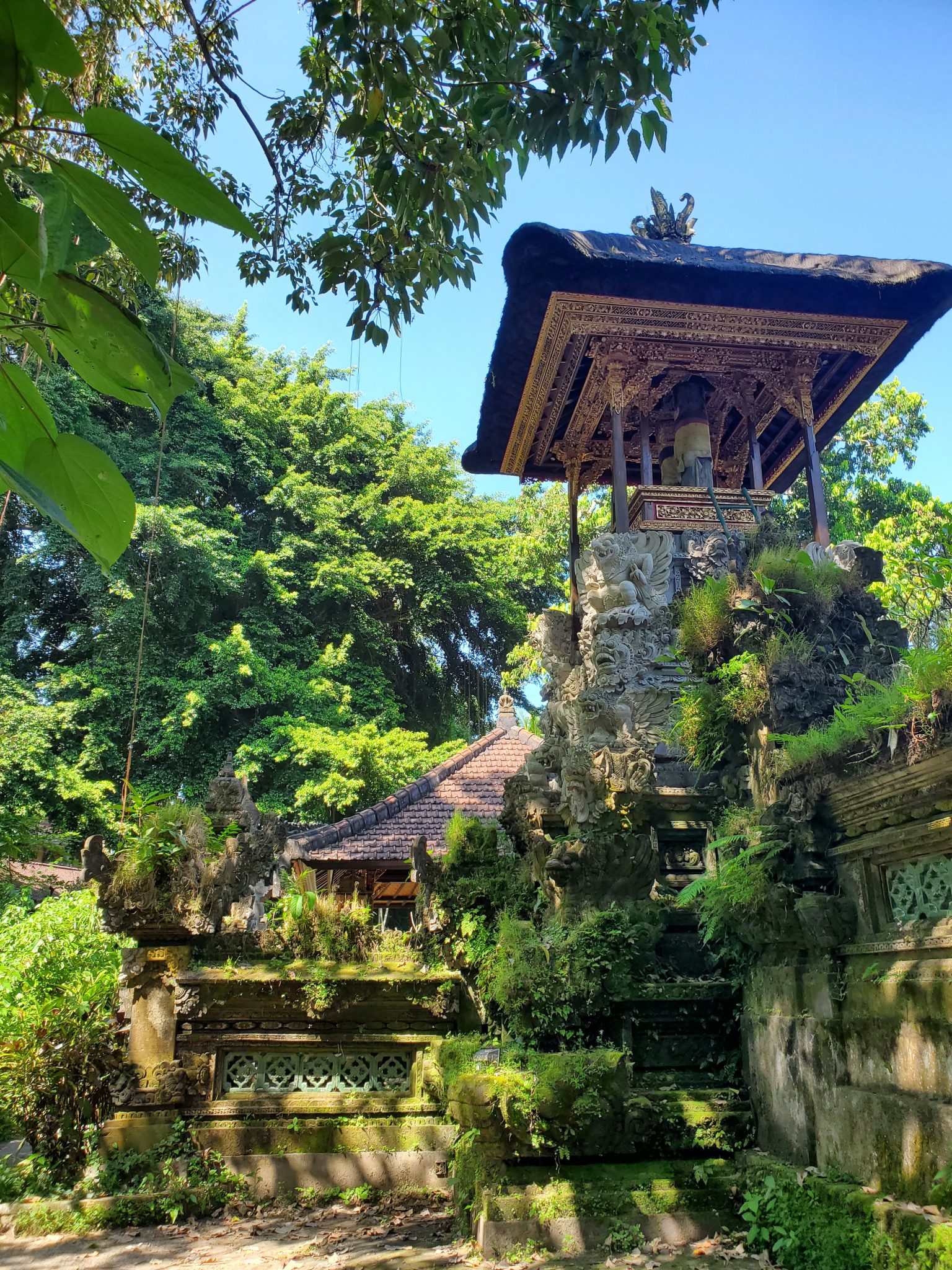 Temple along the Campuhan Ridge trail 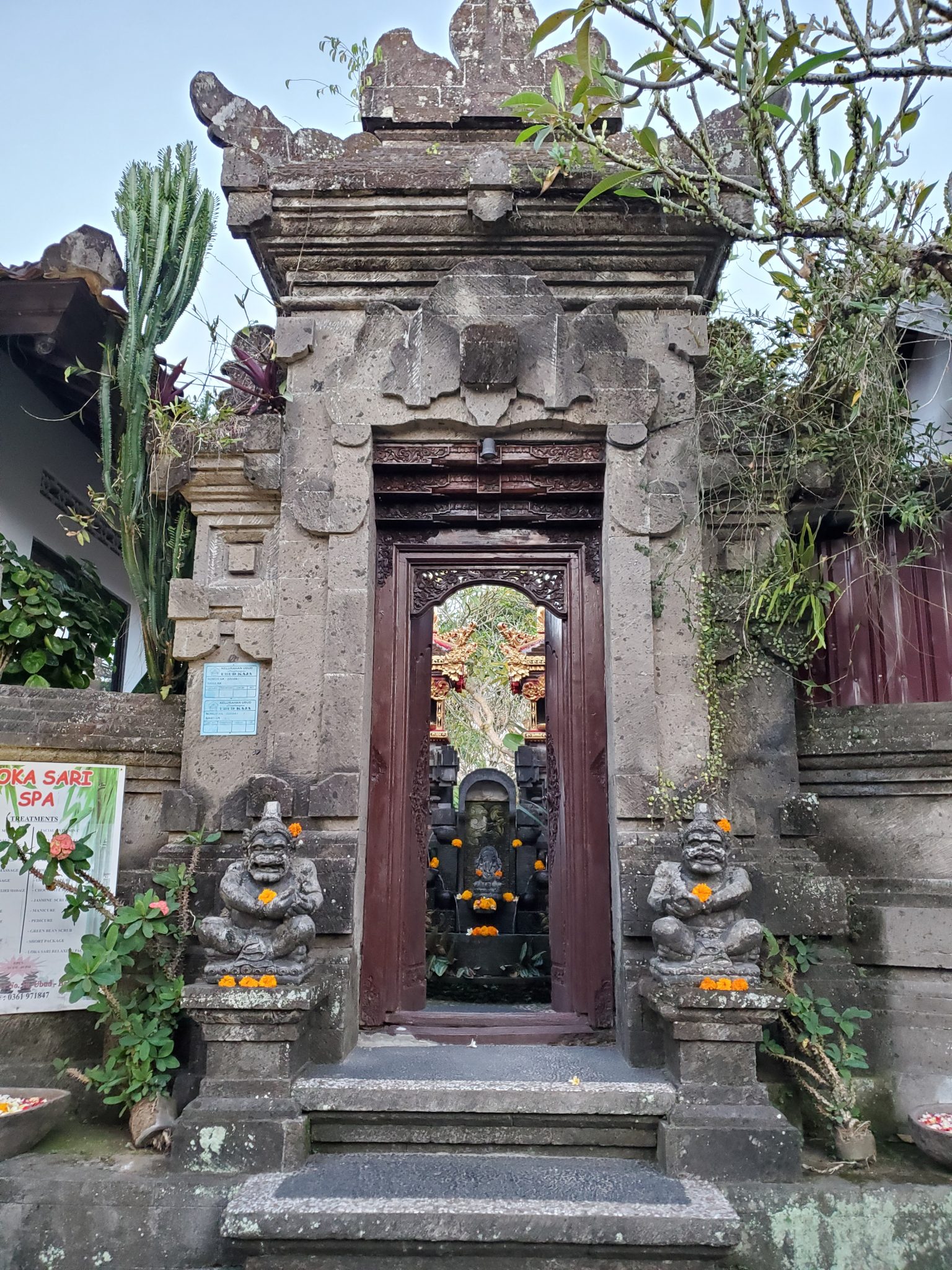 Each home has a temple at the entrance 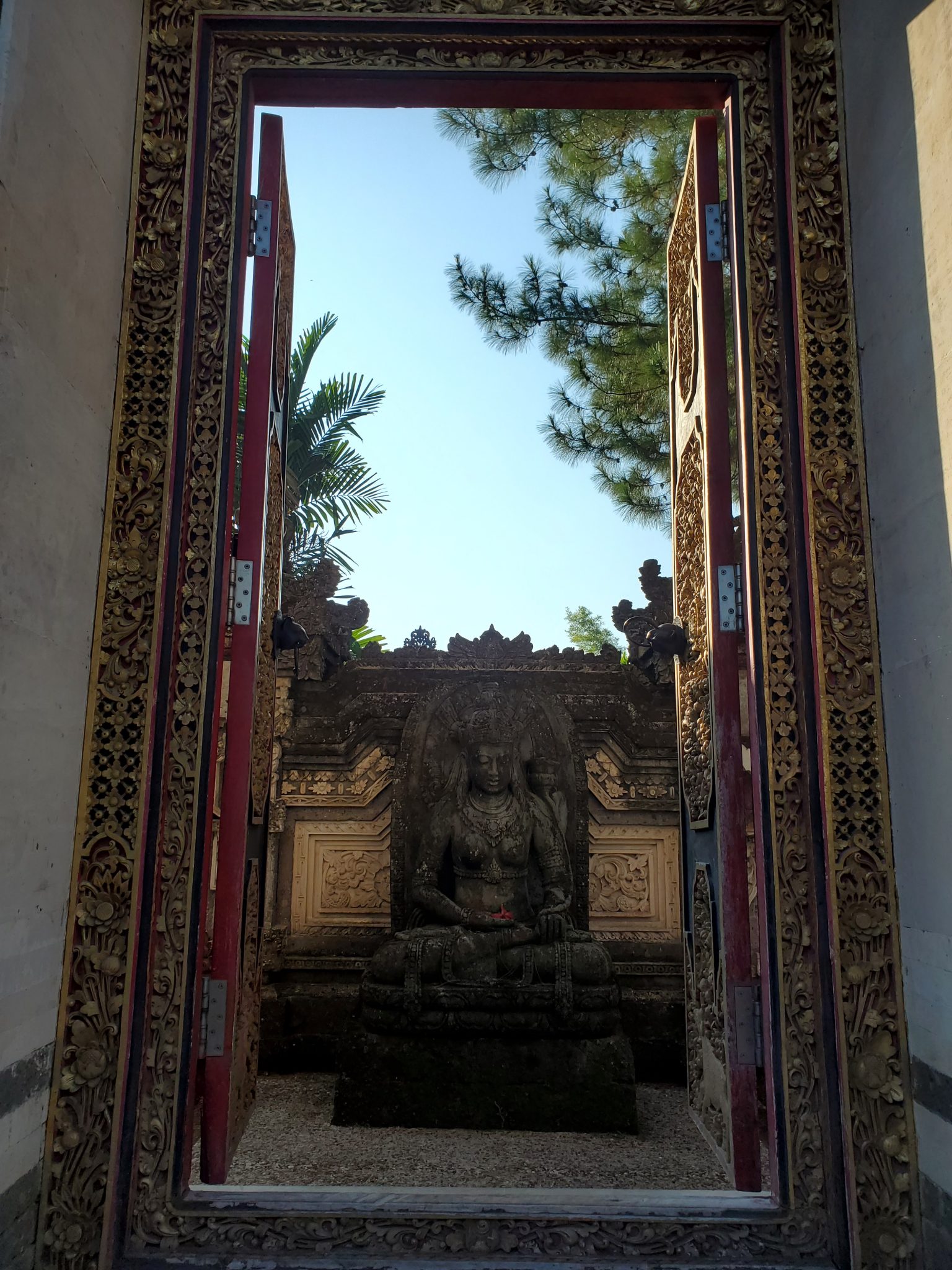 Statue inside the temple entrance of a compound