View from Sea Shed restaurant of the sunset over Mullins Beach

I had a conversation with a man that is deeply unhappy living here in Barbados.  He is planning to leave, while so many of us are finding ways to stay and make this our home.  I felt the weight of his unhappiness.

When I explained my love of the ocean and beaches here in Barbados, this man who is from the tropics said, you can find that anywhere.

But I am here.

He asked if I get lonely here by myself. I do not.  He asked how I have made such close friends here.  I think the answer to these two questions is intertwined.  I have found myself in a happy place and moved towards others who have found the same.  It feels light, even though things continue to happen that would have weighed me down in the past.

This man is frustrated over it taking forever to get things done on the island.  There is an abnormal amount of effort needed to achieve basic things.  I understand.  As I write this, I am sitting in the Magistrates Court trying to get my rent deposit back from a landlord that I consider to be entitled and somewhat crazy.  I don’t talk about this much because if I do it will become the focus of my time here.

Instead, I focus on the weekend past. Operation Pizza in full effect with Luca, Tristan, and Kian

Thursday was Conrad and Lorena’s 20th anniversary.  They went out for the evening, and I stayed with the boys.  We made dinner and then watched The Grinch that Stole Christmas together.  If you don’t know the story, it is about a lonely grinch who tries to stop Christmas because others’ happiness during the season is intolerable to him.  He steals their presents only to find out that Christmas is not about things, but connection to others.

I am not related to this family, yet when I am with them my heart is full.  They have broken down the fortress that I had built around me for years.  I am a lighter person because of it. 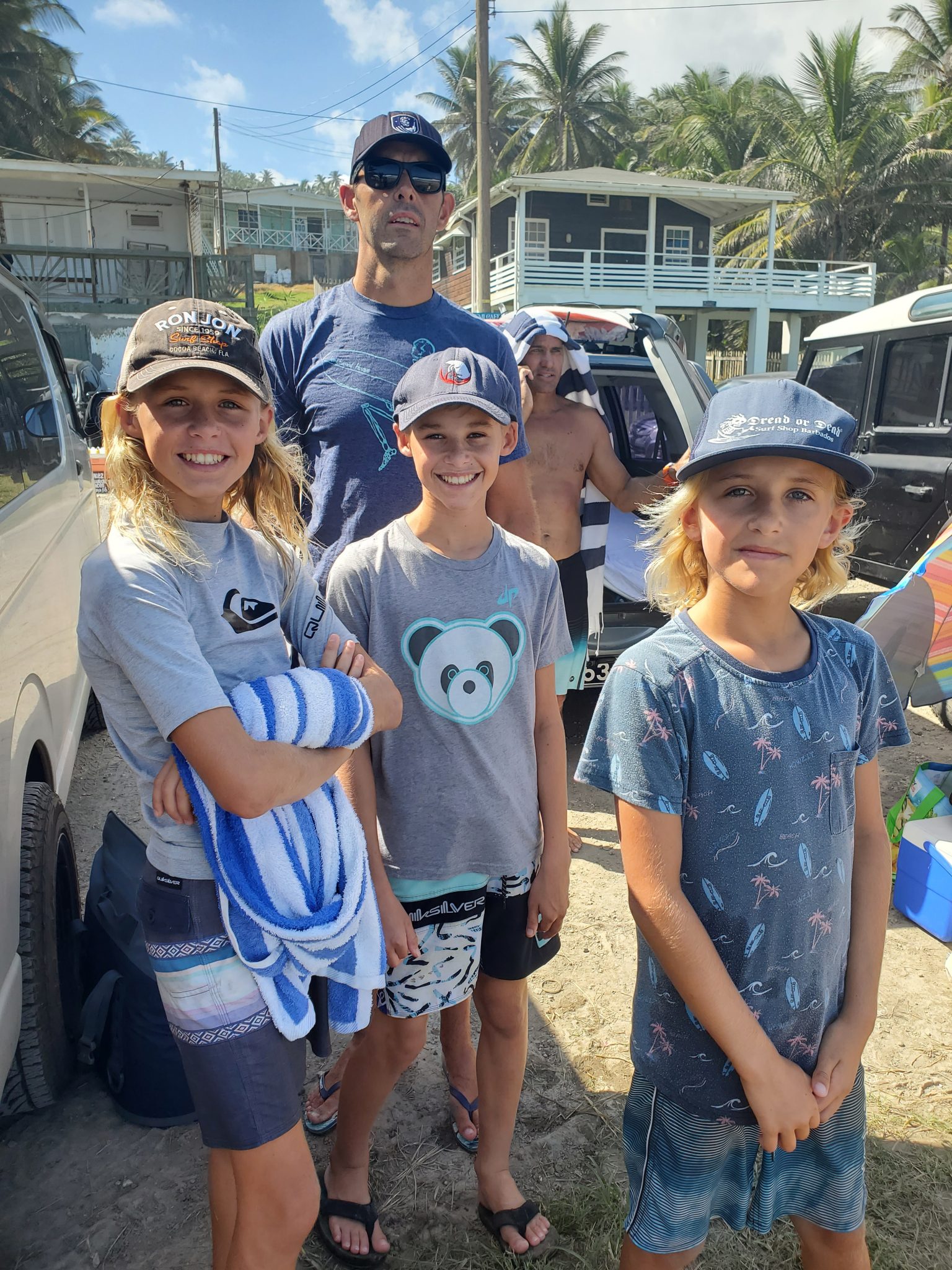 Lorena told the boys they couldn't accost Kelly Slater for a picture, so I got a sneaky of him in the background 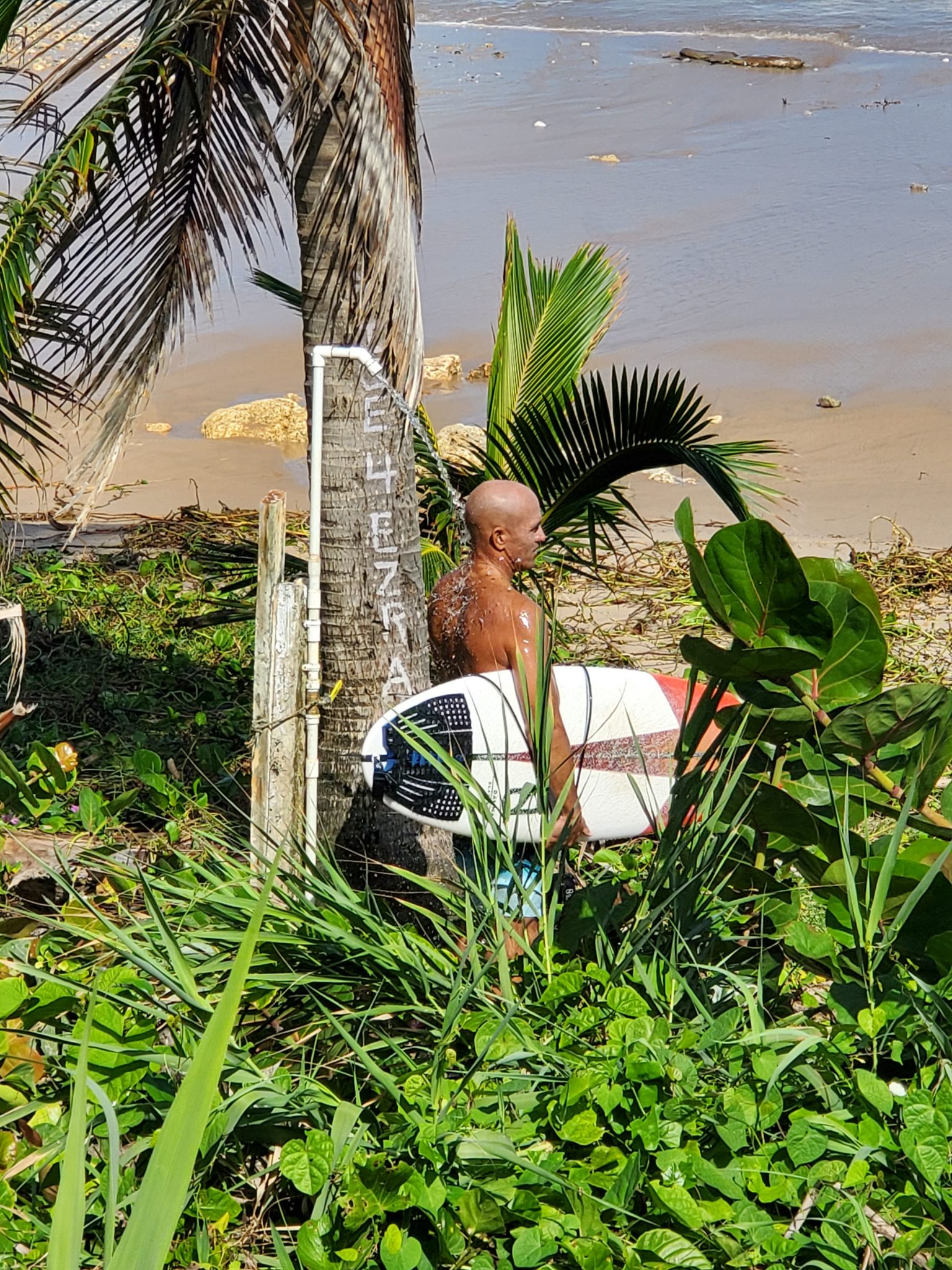 Kelly Slater post surf at the shower...and I know that it is wrong but I also got a video 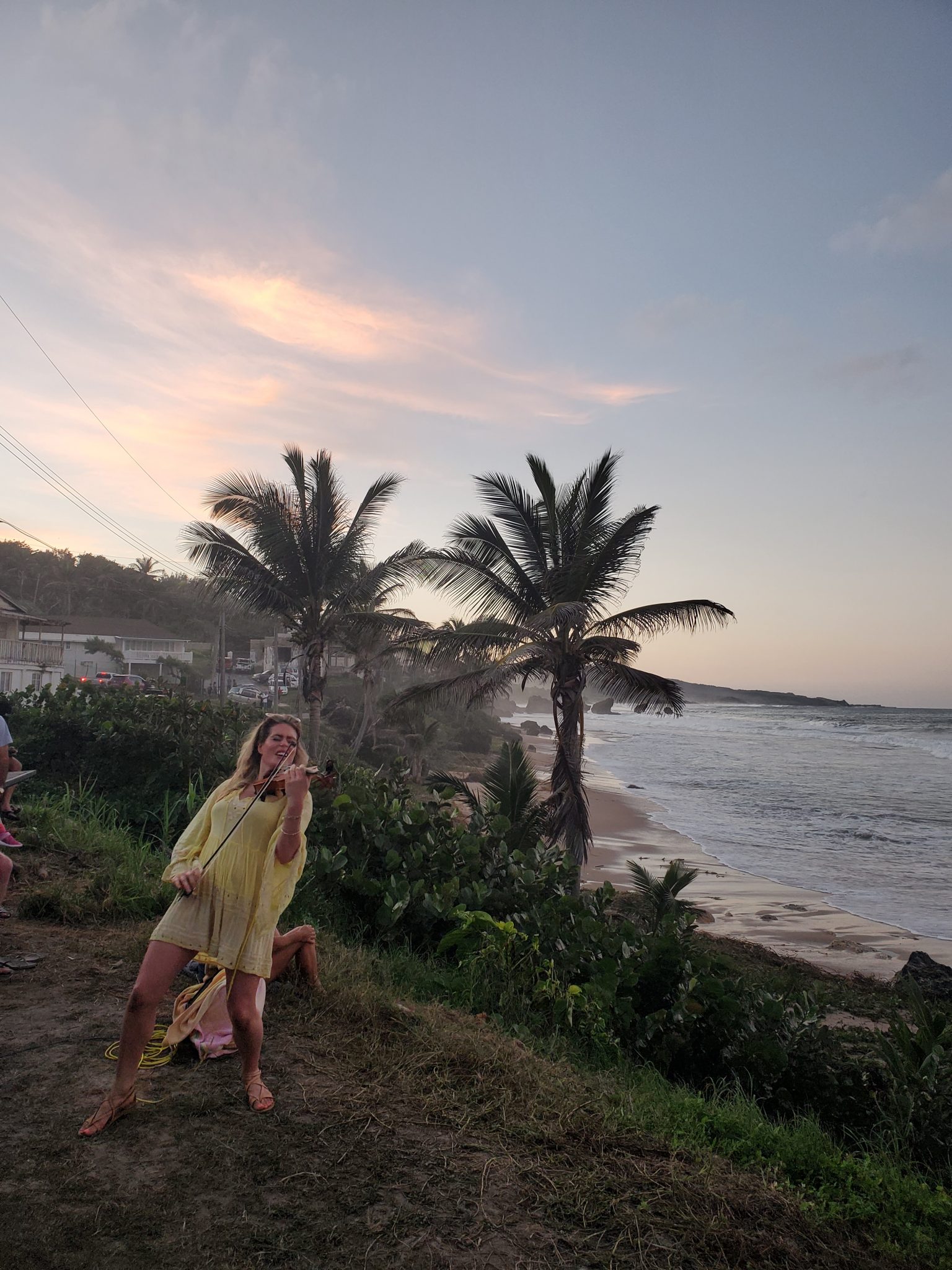 Someone brought their electric violin and sound system to the party overlooking Soup Bowl.

Saturday, I went to watch Kelly Slater, the greatest surfer of all time, perform in the massive waves that were hitting the East Coast on the Soup Bowl break.  I could write an entire blog about the enormity of those waves and the amazing feats of the surfers, both like nothing I have ever seen in my life.  The part that brought me the most joy was the community gathered on the cliff to watch.  We saw his morning session, some of us went out for lunch, and returned to see the pros surf at sunset.

A couple that we surf with brought their two little girls and they joined us for lunch.  The youngest took a real shine to me and wouldn’t let me out of her sight.  Her mom was astonished when the little girl asked to come home with me; apparently, she never warms up to new people.  I now have a vibe that children are drawn to.

People used to flock to me when I played sports or went dancing – the draw towards joy is strong.  I think that is now my default energy, and I have so much more of it now that I am happy.

Recently, a past work colleague reached out to talk to me about my decision to make the move to Barbados, as she is facing some big life decisions.  My advice: move towards something positive, rather than run away from the negative.  I explained that I had waited until I was desperate to leave the pandemic in Canada.  But as she pointed out, I moved towards freedom, the value I hold most dear.

I hope when this man leaves the island, he escapes the frustrations that plague him here.  Even more, my wish for him is that he moves towards that thing that will bring him joy…and towards its lightness. P.S.  I won my day in court.  The Magistrate awarded me my rent deposit plus some of my legal costs.  She verbalized all the things that I have been thinking and tore a strip off my landlord’s attorney for not presenting evidence.  Justice – another value that I hold dear.

That’s amazing, Sheri! I’m so glad you won! I hope this sets a precedent for others to follow your lead and not be intimidated by seemingly insurmountable shenanigans.
As for your new-found family, you’re very blessed. Keep spreading the joy. Merry Christmas!

YEAH BABY!!! I am so happy that you have found your joy and holy shit, a new vibe that attracts kids?? YEs baby!! And you’re right about the dancing part. You’re a beauty to be on the dancefloor with. Your smile is huge and you don’t stop. Love you Sheri!! Loved hearing your voice in that video of the amazing surfer!! Hugs, Heather