Traveling Solo: Is it for me?

It has been a long time since I traveled solo.  This trip reminded me of all the reasons that I love and hate it.  These are the questions that one should ask themselves before they travel solo.

When I planned this trip to Bali, I thought to myself, well, if I can pack up my life and move to Barbados on my own, I certainly can take a trip overseas solo again.  I have jumped on a plane by myself many times and know that I am capable.  I have traveled through parts of Central America where there is very little English spoken.  It makes me feel badass.

The first time that I traveled alone I had to ask this question. It was a trip from England all the way to New Zealand – the opposite ends of the earth.  I had planned the trip with a boyfriend and when we broke up, I decided not to lose my deposit on the flight. It was a big trip and a big decision.  However, I had done a lot of traveling up to this point, even if it was not on my own.  I figured I was up to it.  The point being you might want to start small and with others. 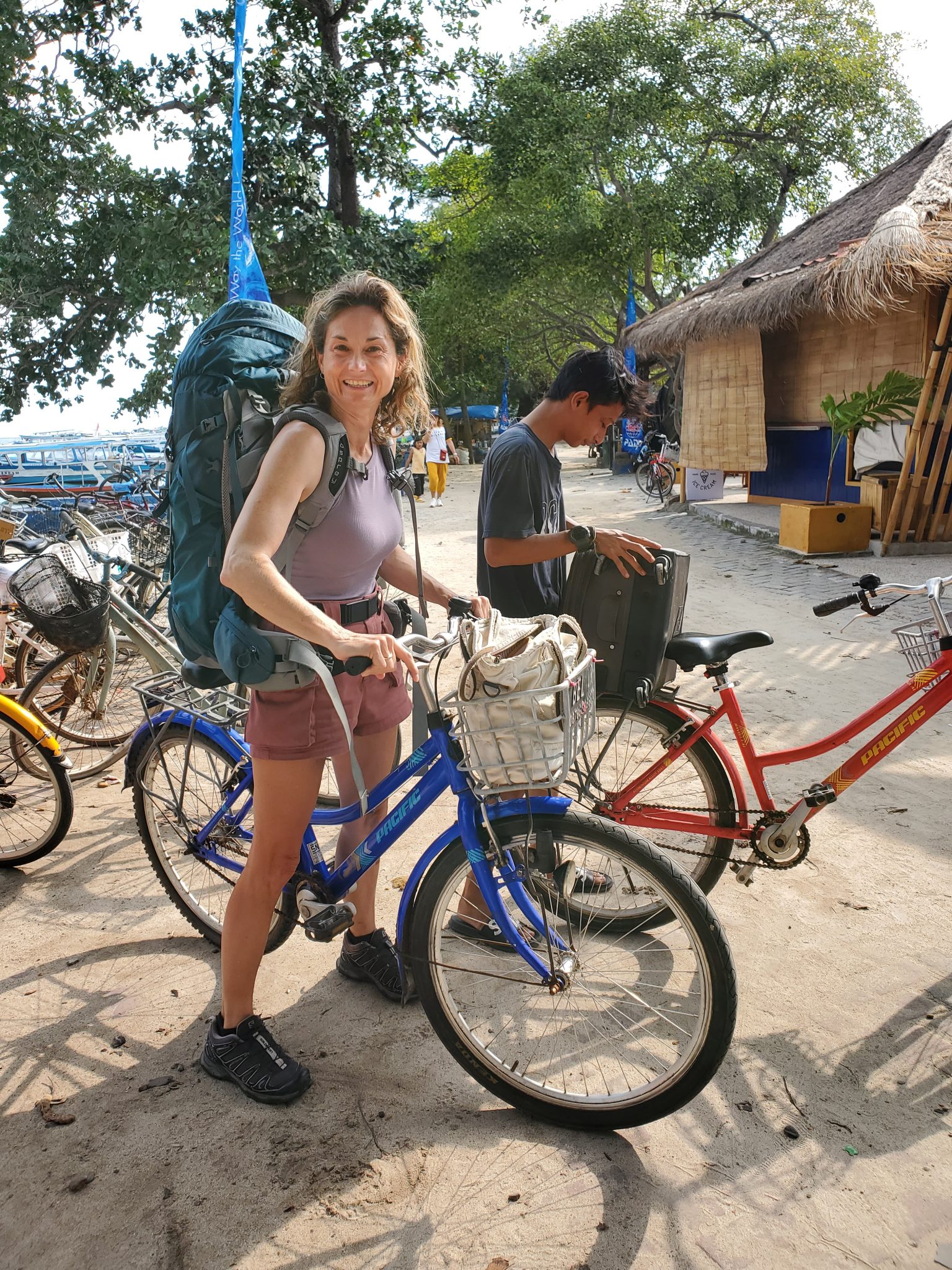 There are no motorized vehicles on the Gili Islands. I was picked up on a bike from the Gili Air harbor. 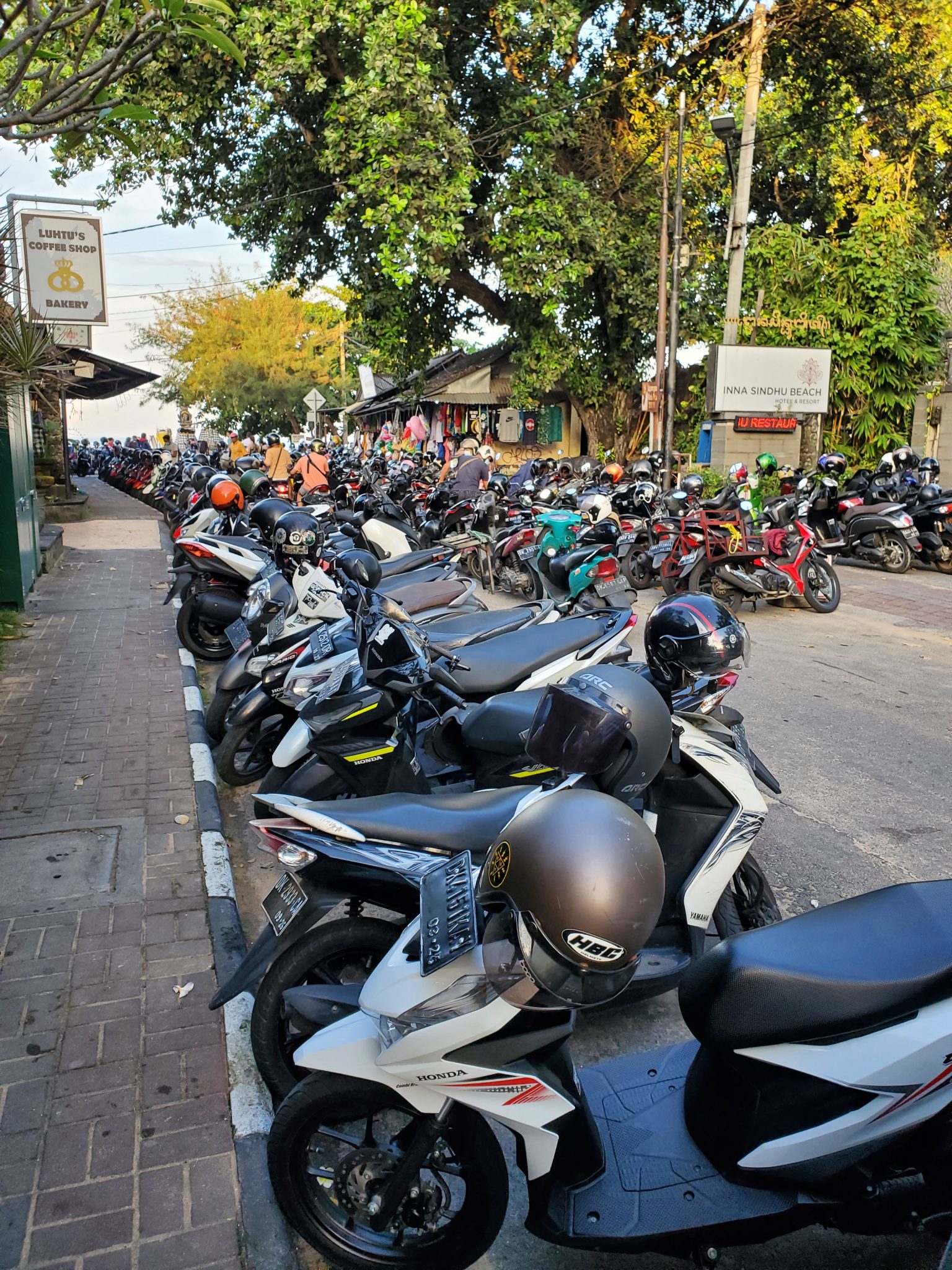 Saturday night in Sanur. Motorbike/ scooter is the way to get around in Bali.

The bigger and better question is whether you want to go traveling solo.  There are a lot of things that I am capable of, but do I really want to do them?!  I can’t say that I wanted to go to Bali solo.  What I can say is that May seemed like a good time to go, when Bali had opened its borders and before the flood gates of tourists burst.  The beginning of the surf season.  I had the funds after a successful first quarter of work.  No one else had the time, timing, and funds to make this journey with me.  So, the question for me has never been do I want to go alone.  The question has always been, is there another traveler that can join me?  For a few years, my sister and I traveled Central America together and I loved it.

After being on the island for 18 months straight, I wanted to leave Barbados.  After the world had been locked up for two years, I wanted to return to traveling.  I wanted to do these things badly.

What safety do I need?

My recommendation is to choose destinations that are safe and cheap. The combination is quite rare, yet Bali meets the criteria.  You can always throw a bit of money at a problem, which can be costly flying solo in a more expensive country.

This question leads me to one of my great disappointments in life – how the solo female traveler is often treated.  For the most part, my experience in Bali and Lombok has been good.  I was treated with respect and not hassled as a solo traveler.  However, there were two different locations, one in Medewi and another on Gili Air, where the hotel manager made me feel very uncomfortable.  Too many lingering looks and comments about my physical appearance, followed by questions about my marital status. BTW, there are many places in the world that cannot wrap their head around a woman being unmarried; it is too far outside their realm of comprehension in the context of their culture.  While I understand this, I find it very irritating.  Traveling with a male companion eliminates this entire paragraph.

Can I eat alone?

There are many things that you can do without while traveling – eating is not one of them.  I hate eating alone.  Like, really hate it.  I often get room service or eat at the hotel restaurant because I can’t bear the thought of walking into a restaurant and requesting a table just for me.  It’s a thing.

To deal with this, I intersperse my solo traveling with group activities.  On this trip to Bali, I had two surf retreats.  One at Surf Goddess in Seminyak (surfing Sanur) and another at Xanadu in Lombok (surfing Gerupuk).  This is what I discovered:  I love having breakfast or lunch after a surf and comparing notes and laughing about our experiences.  I hate the pressure to go for big group dinners at the end of the day when I am tired and would rather be in bed.  Big groups take a long time at a restaurant, and this is a disaster when I am hangry. 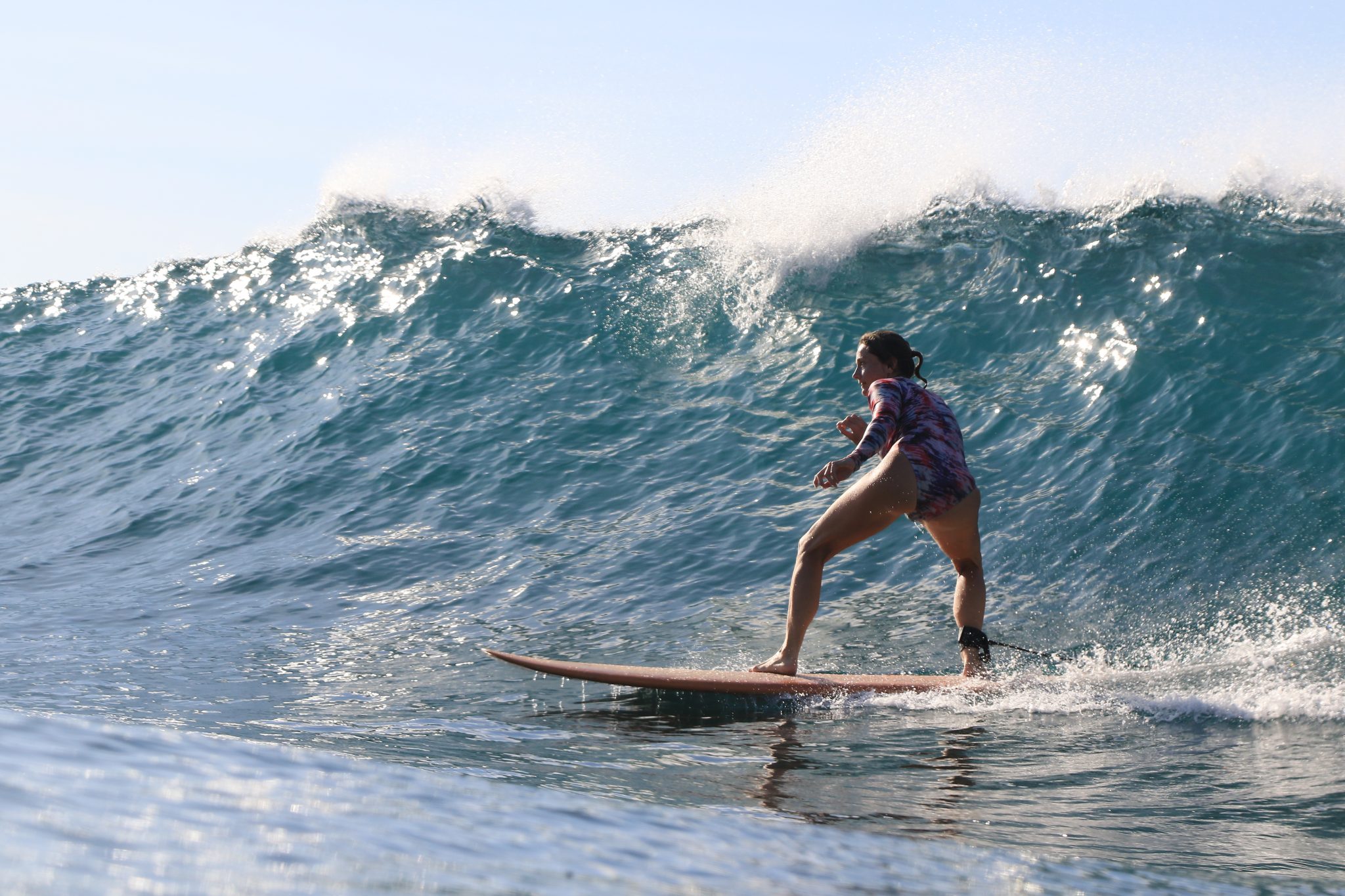 A photographer in the water caught me on this wave at Gerupuk Outside. 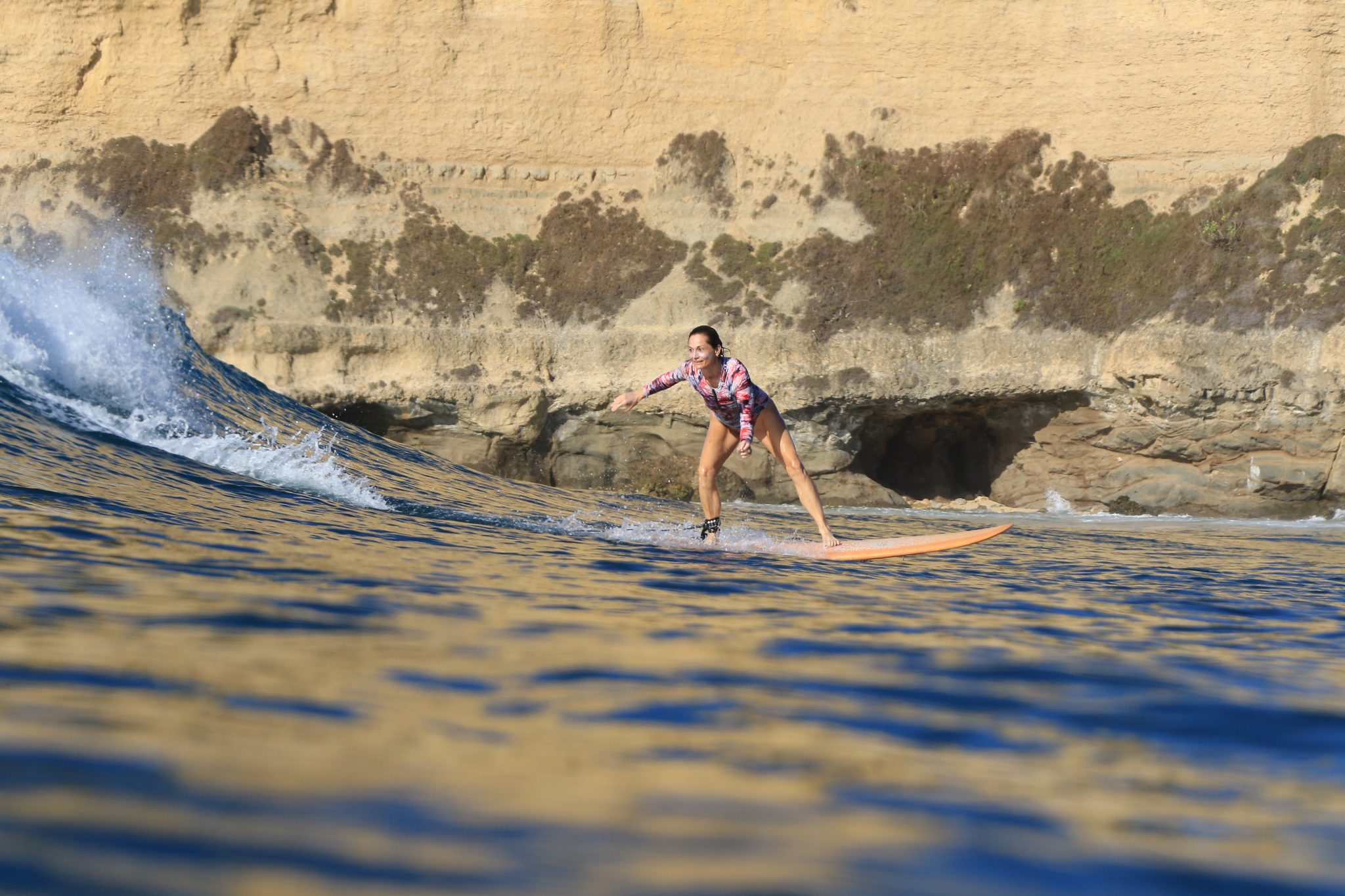 As long as I am still smiling and having fun, I am surfing for all the right reasons.

Underscoring all of this is my gratitude that I can ponder these questions.  There are many people here in Indonesia that would die to go traveling and see the world, in any circumstances.  There are people in Canada who wish their circumstances were such that they could jump on a plane and head off to see the world on their own.  For all the drama and personal pain that being solo most of my life has caused me, traveling whenever I want, wherever I want (within reason) is one of its greatest gifts.  A gift that I did not fully realize until the pandemic and one that I will never take for granted again.  Solo traveling – it’s badass! 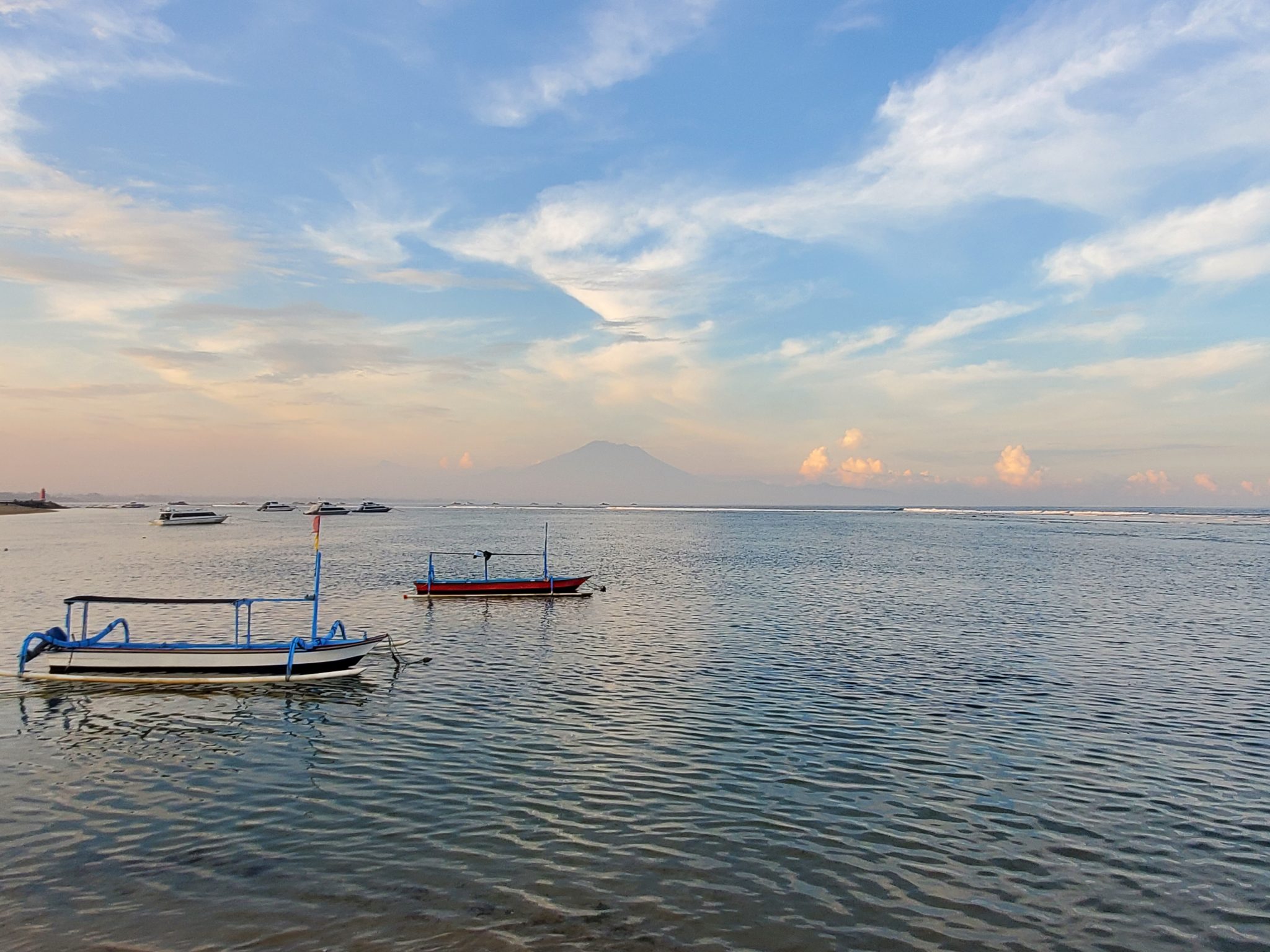 Sunset over the beach in Sanur, Bali 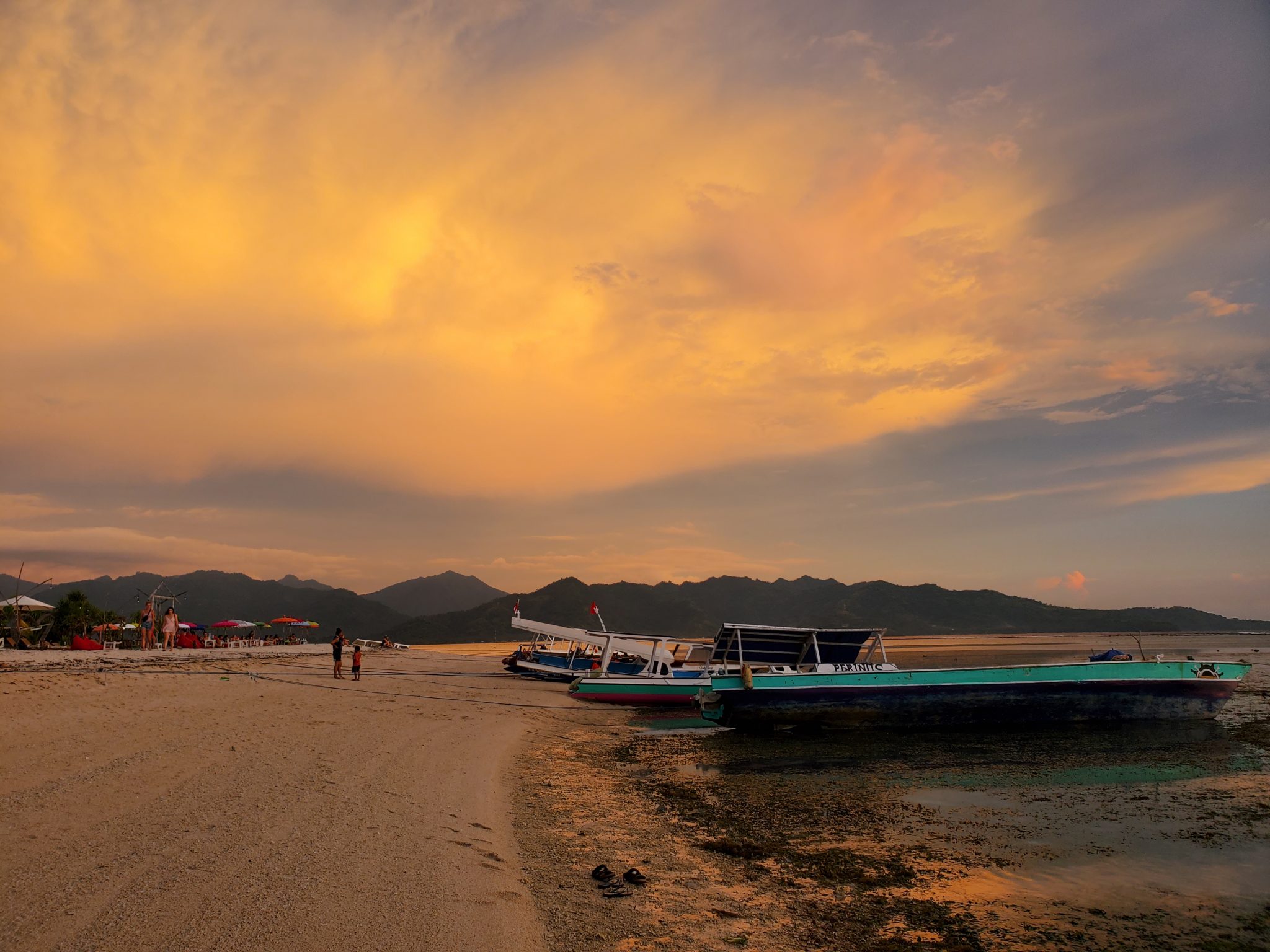 The reflection of the sunset on Gili Air

What about you?  Do you desire to travel solo?

In my experience travelling solo also open the doors to more spontaneous encounters and the possibility to switch plans if you feel like it! The most difficult part for me has often been that these memories through the trip are mine only…no one to recall special moments with. But that is OK ;-)

Anouk, I found this on the Bali trip as well. I was ready to leave surfing at Medewi and didn’t know where to go next. Another surfer was headed to Sanur, so I went with him. We had dinner together and talked about so many things from so many different perspectives. This would not have happened if I wasn’t solo and if I had planned my entire itinerary ahead of time. I am glad that Bali hasn’t reached its pre-pandemic tourist numbers because after living in Barbados I am unable to plan more than a few days in advance! Sharing my experiences here is not the same as with a companion but a nice alternative. Thanks for reading!